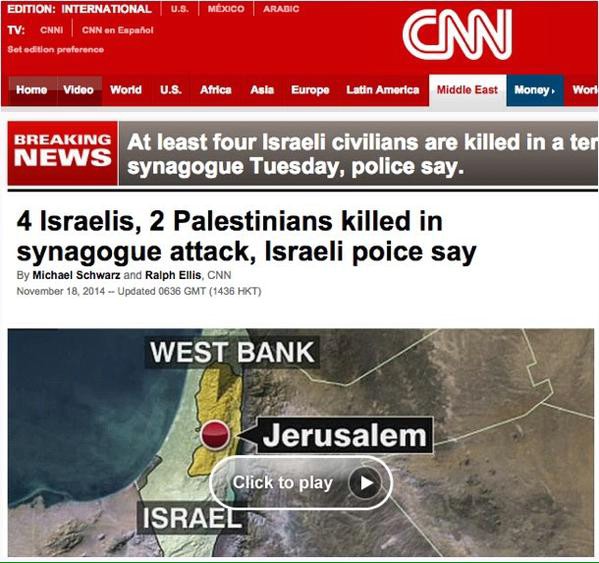 It is really not a revelation to report that CNN is less than honest when it comes to its coverage of events in Israel. While factually the articles are correct, the headlines and at times the story are slanted in such a way that a reader receives a less than accurate reading of events. This was the case today following the Har Nof terror attack when CNN correspondent Ben Wedeman @bencnn published the headline “4 Israelis, 2 Palestinians killed in Synagogue  attack” which was in fact true, opting to ignore the fact the “2 Palestinians” were Arab terrorists and Jerusalem residents who just butchered worshipers in a Jerusalem shul, innocent Jewish residents of the Jerusalem neighborhood in the midst of morning prayers.

The headlines noticeably omitted that the two Palestinians were the terrorists armed with guns and knives who were responsible for the attack which claimed the lives of at four innocent people Davening Shacharis.

Shomron Regional Council media relations liaison Yossi Dagan was infuriated when catching the headline, which he calls a gross violation of journalistic ethics, demanding that the Government Press Office follow-up by revoking Wedeman’s credentials in Israel.

Dagan angrily laments the fact that agencies can get away with this, adding they can only do so in Israel.

“Israelis who were hoping for some understanding, internationally, instead were stuck with CNN in an item whose headline was outrageous,” a story on their website read.