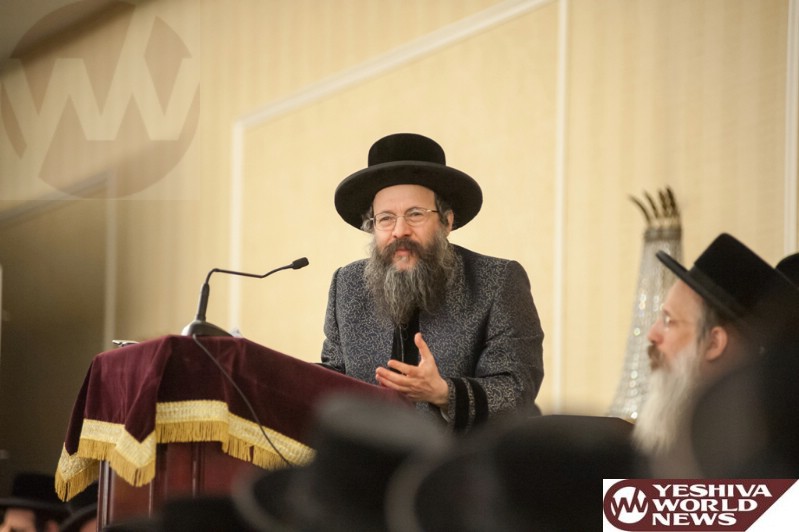 Thousands of Chassidim participated last night, Tuesday, in a monumental gathering organized by Bobov-45, regarding the Borerus that was issued at the end of August, containing numerous clauses against the community. Recently, the verdict spawned a storm of controversy concerning its execution, and several Gedolei Yisroel wrote letters condemning the verdict. The Gaon R’ Moshe Sternbuch shlita, Rosh Av Beis Din of Badatz Eidah haChareidis, referred to the verdict as ‘perplexing’. To his scathing letter, Maran HaGaon R’ Chaim Kanievsky shlita added remarks about the importance of peace and that, understandably, this verdict is the antithesis of peace.

Only Chassidim who had gotten entry tickets beforehand were permitted to attend the gathering, and the three thousand seats filled up quickly. Buses transported Chassidim from all major neighborhoods, and the dais was filled with illustrious members of the Chassidus and with the revered offspring of the Bobover Rebbes zy”a.  In attendance were many notable grandchildren of the Kedushas Tzion: Rabbi Professor Abraham J. Twersky, Sassover Rabbi Shlomo Freshwatter, and the Sorvosher Ruv Rabbi Burech Duvid Halbershtam , Pokshevitzer ruv, Rabbi Yecvhiel Halberstam among others.

After that, the Gabbai libais Bobov R’ Simcha Pinchos Strohli introduced the event with an explanation of its purpose, the Rebbe of Bobov-45 began his riveting lecture. Following is a synopsis of its main points:

“Now that we find ourselves in a situation where there are two paths that we can take, I want to discuss the matter. Rosh Chodesh Elul, shortly after the Borerus regarding ‘Bobov’ was issued, I said that we will hear from the Gedolei Yisroel about the right thing to do, as per da’as Torah. I asked the kehillah not to immerse themselves in this matter.  I wanted Ellul should look like Ellul, with the tzibur immersed in torah and Avodah. We assigned the dedicated askanim who went around to the homes of Gedolei Yisroel and revered Rabbanim to ask their opinion in regards to obeying the verdict. 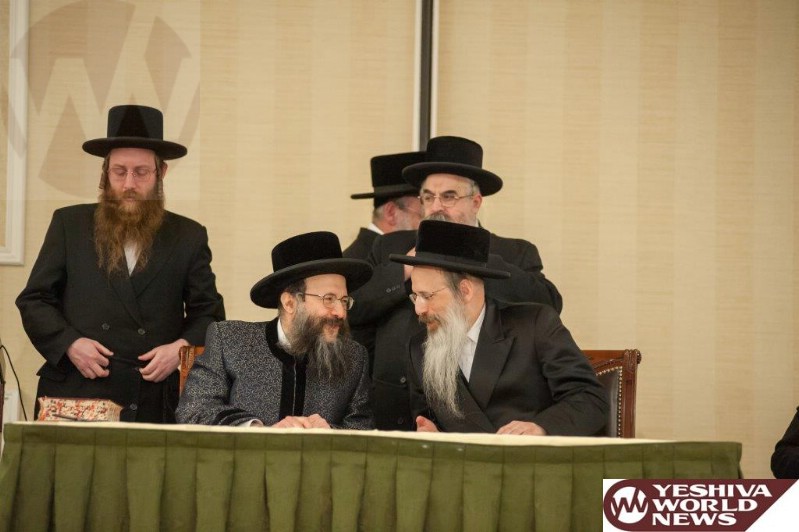 “Now I want to share with you what the Gedolei Yisroel said. The actual Borerus was incomprehensible to them, and every one of the gedolim used a different turn of phrase – several said that it is biased, others said that it is actually a distortion of halacha, while several used even harsher descriptions. There were even several amongst them who said that it is permitted to go to court to obtain a stop-order.

“One of the most renowned poskim in Eretz Yisroel, HaGaon R’ Mendel Shafran shlita, told me in conversation that “It is permitted to go to court to request a stop-order against the Borerus.” I asked him if I may publicize these words in his name, and he clearly replied that I may definitely do so, and that his words could even be recorded and publicized.

Other Gedolei Yisroel told us to turn to a 3rd party Beis Din, considering that doubts regarding the viability of several Borerim that sat on the Borerus had been revealed, and we received a hazmanah (i.e. summons) from this Beis Din summoning several of the dayanim, as well as an ikul (i.e. stop-order on the borerus verdict). 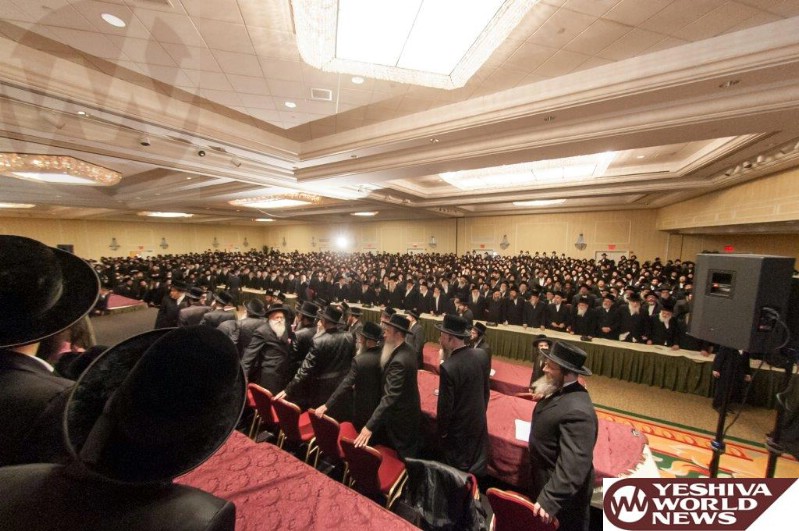 “Since we have such widespread support against the Borerus, maybe it would be proper not to obey the Borerus that the Borerim issued. On the other hand, I fear that by not obeying, we will create a michshol (i.e. stumbling block), and going to court could result in chilul Hashem. Nowadays, when the status of Batei Din in the diaspora is so weak, our disregard of the Borerus could cause the Batei Din to be even more degraded. There will be those who will say that in Bobov, the Borerus was not upheld, which means that one is not required to listen to Beis Din at all. This could chas v’sholom lead to transgressions. People will not realize that in our case, there was a specific heter, and they will allow themselves to follow our lead by going to court. This is extremely undesirable.

“Another  hesitation that I had was that if we don’t obey the Borerus, it will cause the fires of controversy to burn even stronger.”

The Rebbe quoted the mishna that states that ‘it is better to be termed a fool one’s entire life than to be considered a rasha before Hashem for even one hour’. He mentioned an explanation from his grandfather as well as other Torah thoughts. 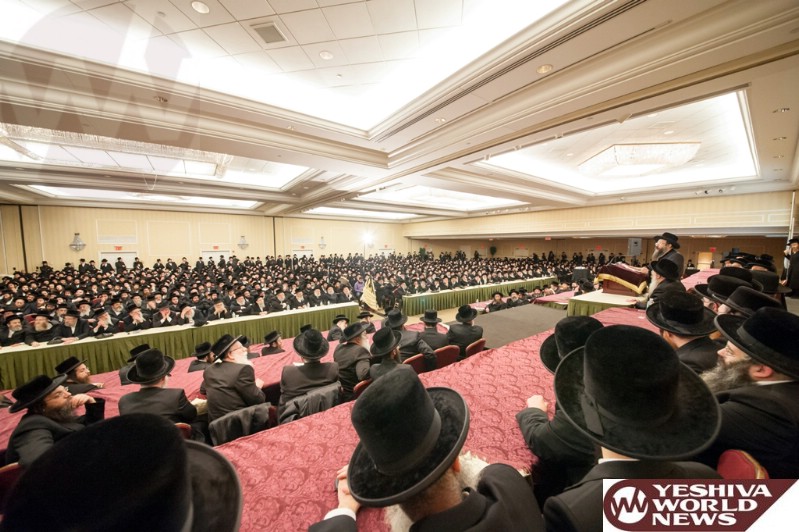 Thereafter, the Rebbe enumerated the reasons why he should not obey the Borerus: a) We have the support of Gedolei Yisroel not to obey the Borerus, b) To uphold the honor of his father-in-law, the Bobover Rav zt”l, whose degradation is painful to all. This is a strong reason not to obey, 3) The humiliation of our kehillah caused by the verdict, and why should we agree to this, especially after all the anguish that this machlokes caused in so many families throughout the years.

“There are two sides before us – one dictates that we obey and one dictates that we should not obey. I plumbed the depths of this matter, together with my brother-in-law, HaGaon HaRav shlita, and we made the decision that we will do what our father-in-law, the Rav zt”l, would have done if he would have been faced with such a situation. It is clear as day that my father-in-law and his grandfathers, the Bobover Rebbes zt”l, would certainly have chosen the path that is closest to peace, as we have seen in their conduct throughout the years.

“Therefore, this is our decision – to go in the path that is closest to peace. This is not a degradation; this is the path of our forbears. This is the Bobover derech. But this only applies if there will be complete peace. I say this to those who are here and to those who are not here. We are taking this step only to attain peace, and only if there will be peace, will the verdict be obeyed…

“We will go with this distinction – 45 – and as I previously said, we do not view this as a degradation and this is not an accompanying title. Rather, it is a random distinction, and we should note that, linguistically, this signifies the path of the Rav zt”l – ‘vanachni mah’ (i.e. a path of humility, signified by the numerical equivalence of the word ‘mah’ which is 45).

In conclusion, the Rebbe spoke about the glory of the kehillah, with its multitude of branches internationally, and its many magnificent mosdos educating approximately 4,500 students.

“We must now proceed with the building of our Beis Medrash, and several millions have already been pledged by philanthropists in our community. We hope that very soon construction will begin.”

The Rebbe mentioned the gruesome tragedy that took place that day in Yerushalayim and blessed that in the merit of following a path of Shalom and making a Kiddush Hashem, our brethren in Israel should be protected from harm. 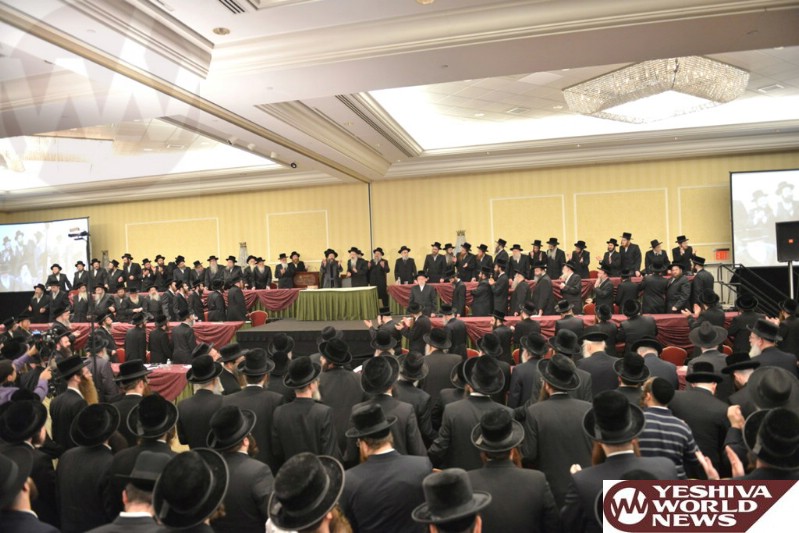 The Rebbe referenced the words in this week’s parsha: ‘And he moved away from there, and he dug another well and they did not fight over it, and he named that place Rechovos, and he said that now Hashem has expanded for us and we have multiplied in the land’. The Rebbe concluded his historic remarks with a beracha that we should always merit going in the ways of our forbears.

After the Rebbe’s speech, the massive crowd instantaneously burst into song and dance, led by the Rebbe and all those seated on the dais.

Thereafter, Harav R’ Shlomo Freshwater shlita, Av Beis Din Sossov-London, and a descendant of the Kedushas Zion zy”a, took the floor. He had traveled from London to participate in this historic gathering.

Rav Freshwater described in full detail the greatness of the Rebbe and the community, and the magnitude of the decision that the Rebbe had made despite the fact that he could have easily done otherwise.  He described the strong mesirus nefesth that is inherent in this decision.

That evening, immediately after the gathering, the Rebbe ordered all menahilim and gabbaim to make a Kiddush Hashem and switch the signs, plaques and letterheads as soon as possible to incorporate the distinction. 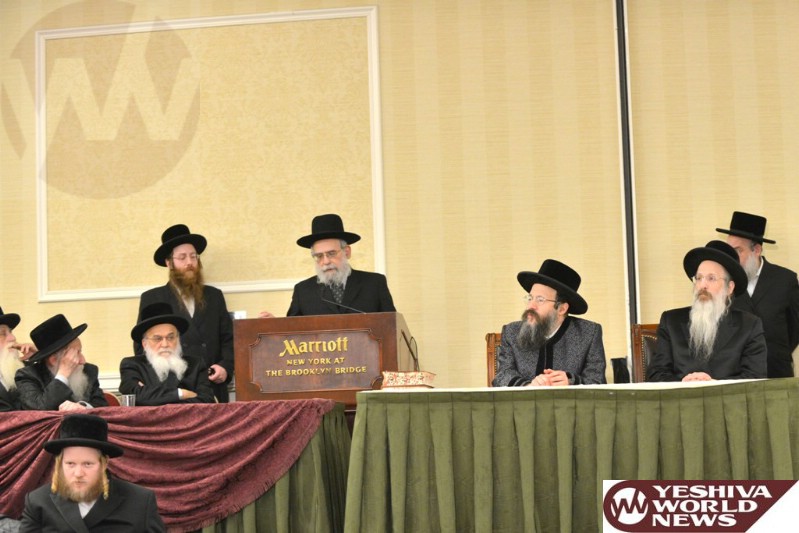 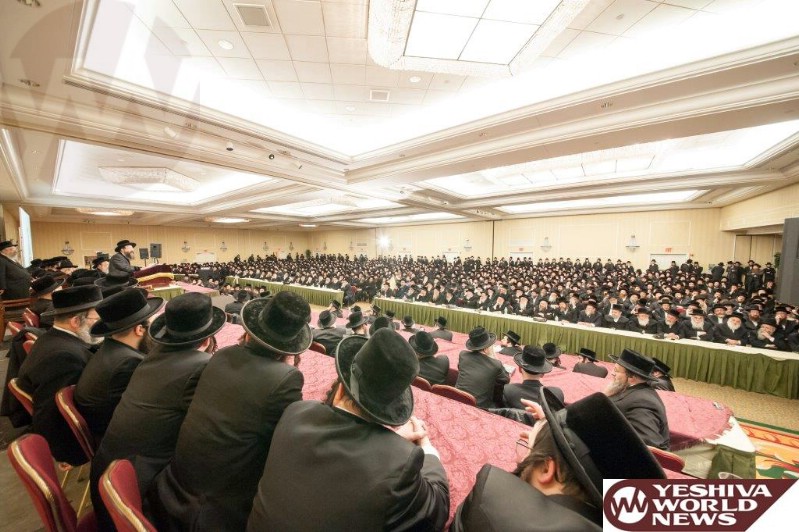 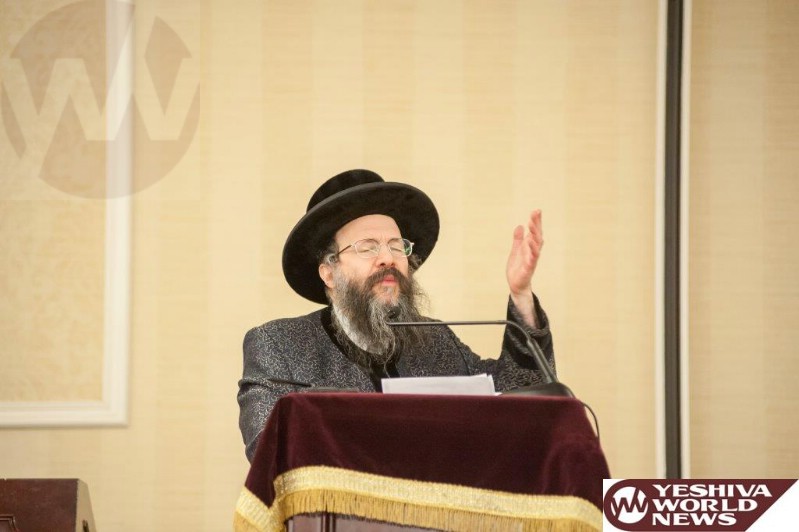 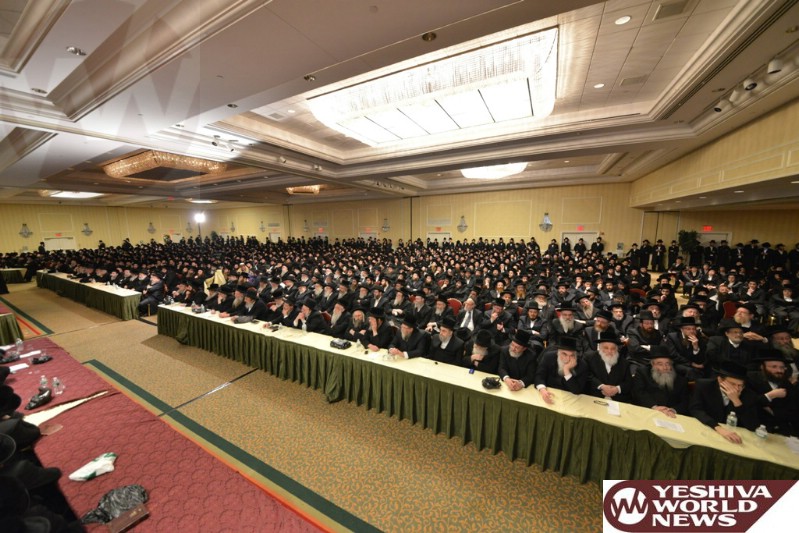 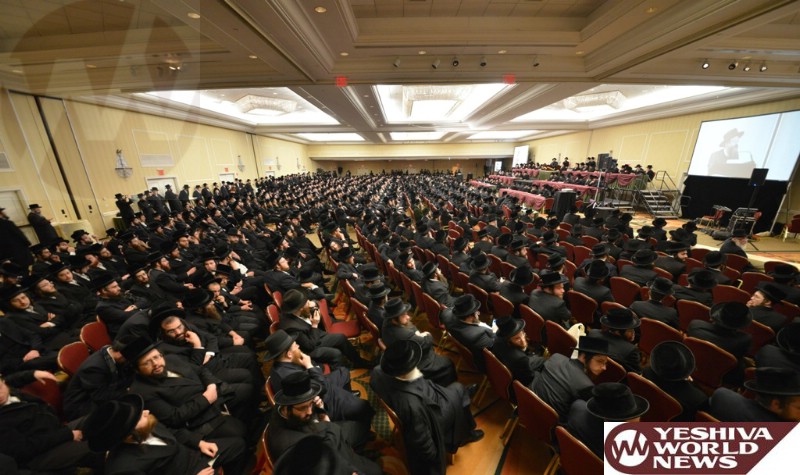 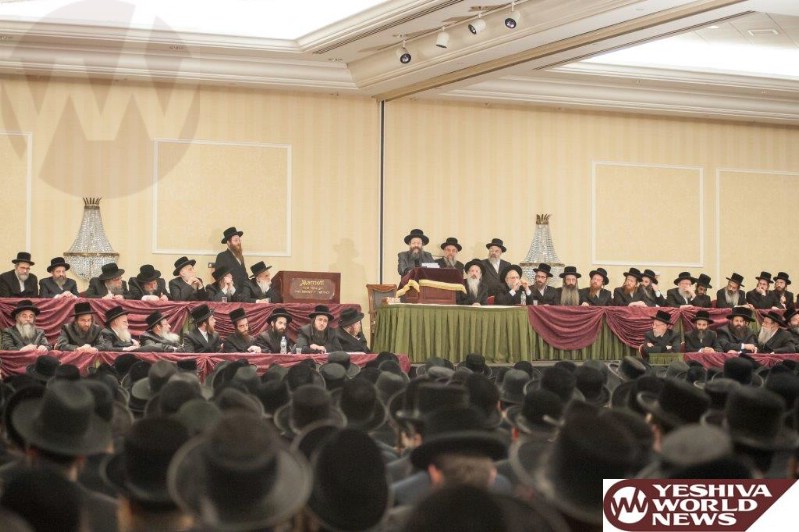 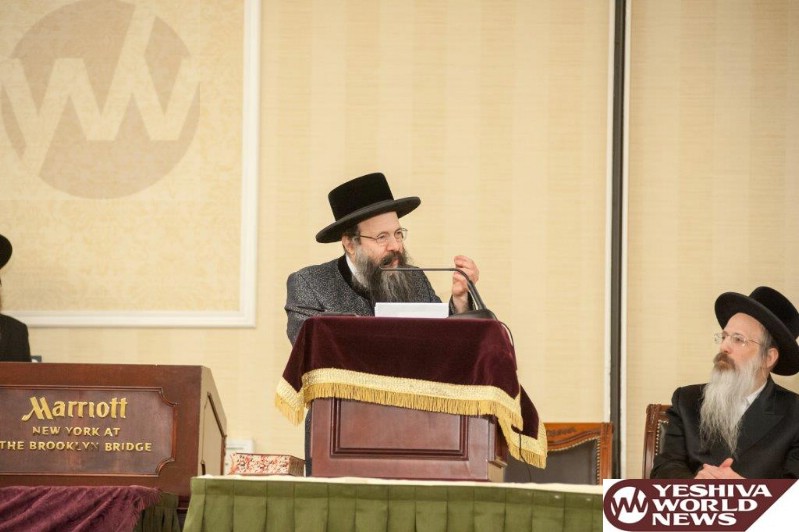 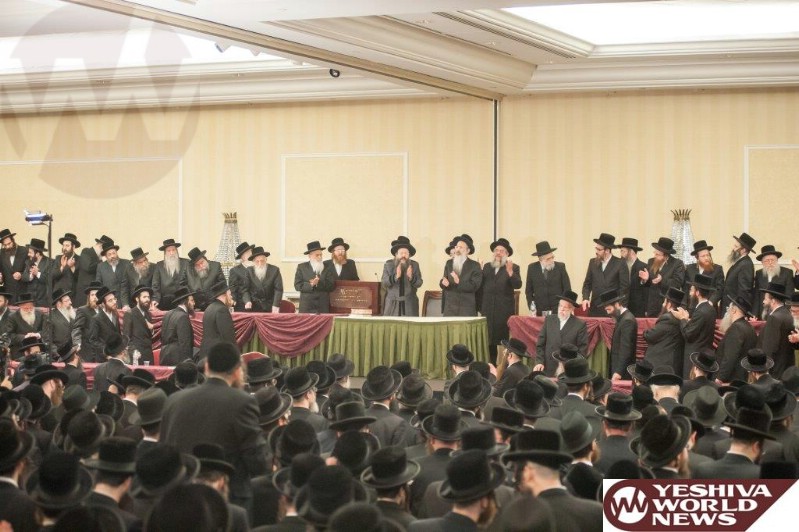 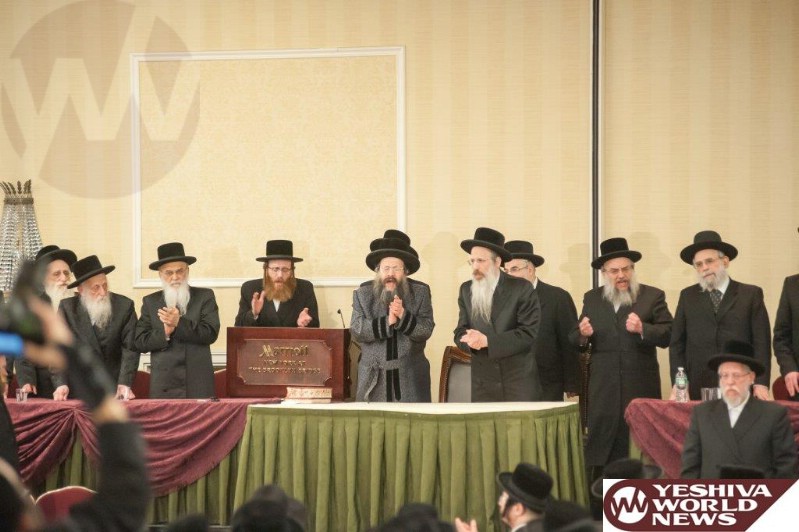 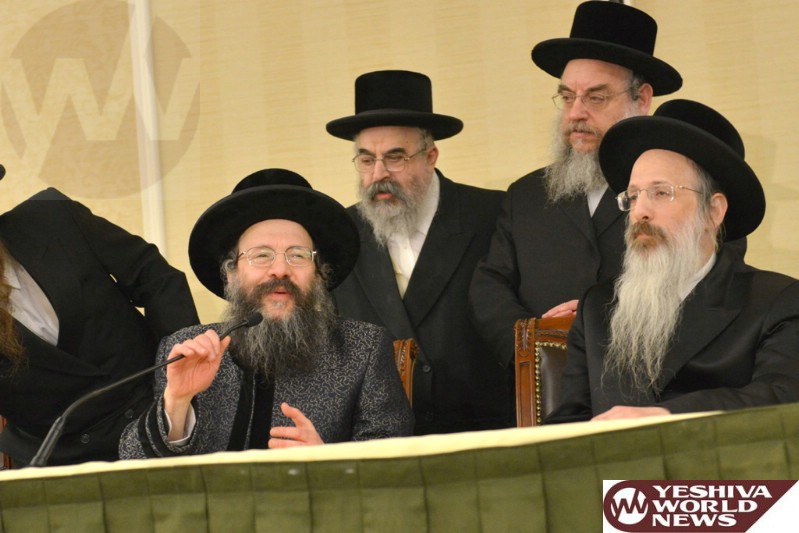