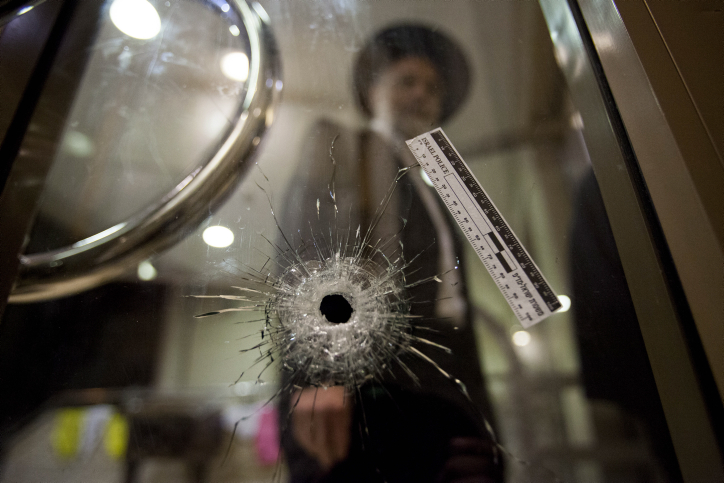 The following was sent by a YWN reader.

We heard the ambulances. We heard there was a terrorist attack. Then we heard it was at our shul down the road.

We got a phone call from Chaya Levine asking my husband to please look at the shul next door to see if Rav Kalman was there. My husband had dovened neitz with him just a short time ago. Rav Kalman gave him a hearty “yashar koach” for his duchening, and went back to learn. My husband came home to get Binyomin Dovid ready for the school bus.

You see Tuesday morning is Abba day- Binyomin Dovid looks forward to Tuesday morning all week-. maybe because Abba puts ketchup on the cheese sandwich- or puts more pretzels in the bag than Ima does, or more salt on the salad. Or maybe because he so loves his Abba and their special morning together. And because Tuesday is their special day, my husband dovens at the neitz minyon next to our house,  instead of his regular minyon in Kehillas Bnei Torah.

My husband might have gone to his regular minyon anyway. Since he was often the only Kohen, on Tuesdays he would pop in for chazaras hashatz  just to duchen for them. The carnage occurred during chazaras HaShatz. But Hashem had other plans for my husband.

A few months ago a member of the shul, a Kohen, became an avel-a mourner- and he asked my husband if he could be the regular ba’al tefila. This Tuesday my husband did not go back to duchen, because he knew there would be a Kohen in his minyon.

So after neitz at HaGra, he came home from shul. But Kalman- where was Kalman? My husband went back to HaGra to look for him. But he had left. Kalman had gone to Rav Rubin’s shul to ask the Rav a question. And Kalman did not come home.

We heard names- we heard rumors- we didn’t want to believe they were true. Rav Moshe Twersky- the kind talmid chacham who always made time for those who came to him for guidance and halachic advice, and then taught and learned until late at night. He was the one to whom my husband would turn with questions that came up in the minyon. It was Rav Moshe who said at his son’s aufruf that this minyon was like mishpacha. We had lost a family member.

R’ Aryeh Kupinski.  R’Aryeh? No- not R’ Aryeh? Haven’t they suffered enough? When his daughter Chaya died suddenly in her sleep he was mekabel the din with pure deep faith- and went on to be mechazek others.  R’ Aryeh- always running to help others; always a smile on his face- despite constant challenges. R’  Aryeh was the one who yelled “you run, I’ll fight”  using a chair against a gun and a hatchet to buy time so that others could flee. The ultimate chesed.

The names to doven. Shmuel Yerucham ben Baila. Chaim Yechiel ben Malka. Eitan ben Sarah. Yitzchak ben Chaya. All still in need of tremendous Rachmei Shamayim. Please continue to storm the gates of rachamim on their behalf. Avraham Shmuel ben Sheina. Then the rumors turned to agonizing truth- Avraham Shmuel ben Aharon hy”d.  Mr Goldberg. That nice warm smiley gentleman who loved Torah and Torah scholars, and every single Jew. Who learned every morning and only then went to work.  My husband would set up a shtender for Mr. Goldberg and he in turn would lay out a siddur for Rav Twersky.  That was the kind of minyon it was. It can’t be. But it was.

What about Rav Kalman? We still didn’t know for sure – rumors flying- but Rav Kalman was the most alive person in the world. He was the reason many people came to our shul on Simchas Torah-  to see Rav Kalman’s ecstatic dancing with his beloved Torah.  We should have known if he didn’t come home and didn’t call something was terribly wrong. But we couldn’t believe it could be. And then we heard. The brutal animals shot as they yelled out their vicious war cry. They butchered Rav Kalman as he stood in the hallway absorbed in a sefer-those few seconds gave some of the men in the minyon time to flee out another door.  Rav Kalman’s last act of ahavas Yisroel was to save the life of his friends.

Between the hope and the tears we spoke. “Chaya, do you remember….”.  Binyomin Dovid was a sickly baby with Down syndrome and a host of medical issues and I needed chizuk. I made my way to Bnei Brak to see Rebbetzin Kanievsky.  I waited outside until it was my turn. I came in to her- a sleeping baby in my arms. Rebbetzin Kanievsky took one look at him and said “you don’t know what shmira (protection) you have in your home”. I thought I understood. Perhaps, I thought, other things would be easier because this would be difficult. But now, almost 13 years later, I understand.  BD was the only reason my husband was not in his minyon that morning. And because he knew my husband wasn’t coming, his post dovening chevrusa- a stalwart regular in that minyon, decided to doven elsewhere that morning.  We could not have imagined so many years ago that our son would save his father’s life and the life of his chavrusa.

The stories abound. Those who were saved- Rav  E- an elderly gentleman who takes a cab the half a block each morning- but THIS morning the cab didn’t come. Rabbi L was on his way to that minyon and for some reason he cannot explain, found himself turning into a closer shul, and stayed there.  A. was up during the night helping his wife who felt unwell, so he decided to doven elsewhere. R’ S who smashed a terrorist over the head twice with a chair to try to stop his shooting, and somehow managed to run out unscathed. Rav P, Reb B, Rav Pr and Rav F who somehow ran through the line of fire out the door. Rav S who was hiding behind the bima until something told him to get out- and he managed to run through the side door.  Rav I saw one of the terrorists in the kitchen on his way in earlier. He thought he was one of the many who come into the shul to take a free cup of coffee in the morning. Why didn’t he shoot him then? He escaped through a side door when the shooting started in the shul. Dr. H and Rav W who ran out after throwing a table at the terrorists.  HaRav B, who is not a young man, heard the commotion and came downstairs. As he was trying to help one of the victims, he was shot repeatedly by the terrorists- but the guns misfired four times. When they pulled out a knife he ran upstairs. An old man outrunning two young terrorists?

And those who were not saved.  Rav Kalman regularly dovens shacharis elsewhere and only came to ask a question of a Rav whom he didn’t know was not yet there. Rav Aryeh came perhaps once or twice a month to that minyon.  The first chovesh (paramedic) who appeared at the scene always carries a gun- but he left it at home that morning. One thing was clear-it appeared random- but it is only random in the eyes of the world- we have to know that it is exacting in the eyes of Hashem, and that while we cannot possibly understand the equation we know it is the Truth.

To us, it is clear that the world is run with exactitude- and that this brutal butchering of innocent souls had purpose and meaning. We must focus inward- -avoiding politics and rage.  We must focus our energy inward by asking what each of us can do better than before. That is the Jewish response.

Wednesday morning my husband dovened in his minyon. He set out no shtender, laid out no siddur. R’ Chaim, fighting for his life, was not there to call out “kohanim”.  Rav Moshe was not be there today to lein. He will not ask for an Aliyah for his grandmother’s yahrtzeit R”H Teves. My husband took out his gabbai book and added הי”ד to four names.

As Rav Rubin said at the levaya, we must strengthen ourselves in Emuna. We must internalize the knowledge that nothing is by chance, nothing is without purpose and meaning

We must strive in some small way to emulate the kedoshim- so different on the surface but so very much the same- each a true lover of Torah and Talmidei chachamim, each a true lover of his fellow Jew, each a ba’al chesed, each a man with true simchas hachaim. Each of us must look inward; ask “what can I rectify?” Each one of us must make some small yet powerful change.

The family of the kedoshim asked those who came to the shiva to please take on something for Am Yisrael. This is derech HaTorah. This will give nechama to the widows, the orphans. This will be a z’chus for a refuah for the injured.

And we can pray, that this will be the final chapter in the long and painful history of golus- and this will bring the Geula bimheyra biyameinu