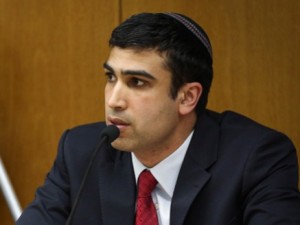 Bayit Yehudi MK Yoni Chetboun has decided not to run in the upcoming primaries. He has reached the end of his road in the dati leumi party which he feels has failed to place sufficient emphasis on the “dati” aspect of the decision-making process.

In the past, Chetboun defied party discipline when he would not support criminal sanctions in the formulation of the law to draft chareidim into the IDF. He was sanctioned by the party leader, sanctions that included removing him from his seat on the Knesset Foreign Affairs & Defense Committee.

In his last act in the party, Chetboun refused to sign a letter circulated by party leader Naftali Bennett as was reported by YWN-ISRAEL. Chetboun feared the letter was written in such a way that it represented approval of making decisions in the future without consulting daas Torah. He was the only member of the dati leumi party who refused to sign the letter.

Amid the speculation surrounding Chetboun’s imminent move, there are predictions that he, Uri Ariel and Eli Yishai will team up to form a new party.