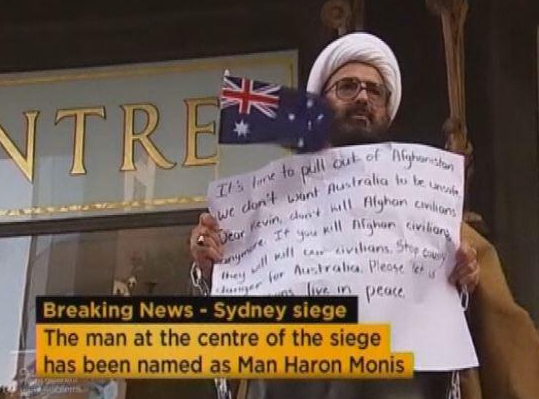 The gunman could be seen pacing back and forth past the cafe’s windows. Reporter Chris Reason said the man carried what appeared to be a pump-action shotgun, was unshaven and wore a white shirt and a black cap.

Earlier Monday, network staff counted about 15 different faces among hostages forced up against the windows.

“The gunman seems to be sort of rotating these people through these positions on the windows with their hands and faces up against the glass,” Reason said in a report from the vantage point. “One woman we’ve counted was there for at least two hours — an extraordinary, agonizing time for her surely having to stand on her feet for that long.”

“When we saw that rush of escapees, we could see from up here in this vantage point the gunman got extremely agitated as he realized those five had got out. He started screaming orders at the people, the hostages who remain behind,” he added.

Reason later reported that staff brought food from a kitchen at the rear of the cafe and the hostages were fed.

As night set in, the lights inside the cafe were switched off. Armed police guarding the area outside fitted their helmets with green-glowing night goggles.

St. Vincent’s hospital spokesman David Faktor said a male hostage was in satisfactory condition in the hospital’s emergency department. He was the only one of the freed hostages to be taken to a hospital, and Scipione said he was being treated for a pre-existing condition.

Hundreds of police blanketed the city as streets were closed and offices evacuated. The public was told to stay away from Martin Place, site of the state premier’s office, the Reserve Bank of Australia, and the headquarters of two of the nation’s largest banks. The state parliament house is a few blocks away, and the landmark Sydney Opera House also is nearby.

“This is a very disturbing incident,” Prime Minister Tony Abbott said. “It is profoundly shocking that innocent people should be held hostage by an armed person claiming political motivation.”

Lindt Australia posted a message on its Facebook page thanking the public for its support.

“We are deeply concerned over this serious incident and our thoughts and prayers are with the staff and customers involved and all their friends and families,” the company wrote.

Australia’s government raised the country’s terror warning level in September in response to the domestic threat posed by supporters of the Islamic State group. Counterterror law enforcement teams later conducted dozens of raids and made several arrests in Australia’s three largest cities — Melbourne, Sydney and Brisbane. One man arrested during a series of raids in Sydney was charged with conspiring with an Islamic State leader in Syria to behead a random person in downtown Sydney.

The Islamic State group, which now holds a third of Syria and Iraq, has threatened Australia in the past. In September, Islamic State group spokesman Abu Mohammed al-Adnani issued an audio message urging so-called “lone wolf” attacks abroad, specifically mentioning Australia. Al-Adnani told Muslims to kill all “disbelievers,” whether they be civilians or soldiers.

One terrorism expert said the situation appeared to be that of a “lone wolf” making his own demands, rather than an attack orchestrated by a foreign jihadist group.

“There haven’t been statements from overseas linking this to extremist groups outside the country — that is quite positive,” said Charles Knight, lecturer in the Department of Policing, Intelligence and Counter Terrorism at Australia’s Macquarie University. “The individual or individuals involved didn’t kill early, which is part of the pattern of some recent international attacks. … It seems to be shifting more into the model of a traditional hostage situation, rather than the sort of brutal attacks we’ve seen overseas.”