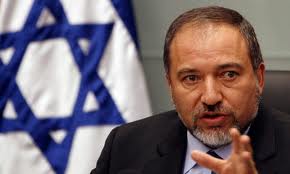 Foreign Minister Avigdor Lieberman, who is viewed as a political hawk, is now signaling a shift to the left as that nation heads to general elections. A poll released on 29 Kislev shows Lieberman’s Yisrael Beitenu party down from 13 seats to 7, perhaps the compelling factor for his effort to portray himself as being more centrist than hawkish right-wing.

Lieberman presents his master peace plan which includes uprooting yishuvim. Interestingly, Lieberman himself resides in eastern Gush Etzion, in the isolated community of Nokdim (El-David). Lieberman explains the time has come to put an end to the conflict and measures must be implemented to reach agreement with nations in the region.

The senior minister explains that once agreements are signed, more funds can be allocated for research and technological development.

“We must reach a diplomatic agreement, not because of the Palestinians or the Arabs but because of the Jews. When there is a deterioration in relations we see what happens to the economy. I can give an example that is very close to me – what occurred in Russia. The more developed a nation is the more sensitive it becomes to political decisions or to fluctuations in economic relations based on agreements and charters”, stated Lieberman.

Lieberman adds that while he respects Prime Minister Binyamin Netanyahu, nothing is taking place today and “There is the status quo and we are pulling in one direction or another” but he feels the lack of progress is harmful. “There is no initiative” he explains, adding that his plan is the more correct path to follow at present.

He reminds us of his land exchange concept, which he says should have been implemented back in Camp David II or the Annapolis talks. “This is the solution as I see it and we will have to uproot isolated yishuvim. We uprooted Gush Katif. In this instance there are solutions and I am less concerned here”.

Lieberman has spoken of the need to swap land in a peace agreement, which he feels must include turning over the Nachal I’ron (Wadi Ara) area in northern Israel, which is home to Israeli Arab municipalities such as Um el-Fahm for areas of Yehuda and Shomron. The land swap in his view will include the Israeli Arab residents of those areas becoming residents of the PA (Palestinian Authority).