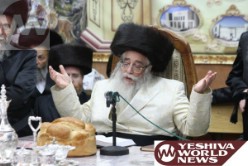 The Sanzer Rebbe Shlita spoke out about the split in Shas. The rebbe on Sunday night the eve of 6 Shevat addressed the split in the chareidi community and the establishment of the new Yachad party headed by Eli Yishai.

The rebbe stated “Od Yosef Chai, Maran HaGaon HaRav Ovadia ZT”L watches from above. He knows the truth and does not like when his words are not interpreted accurately. We all know who and what were placed and we are all his shluchim and we must continue in his path and his heritage to glorify Torah”. “When we see the big tuma that arises against the Jews we understand how much kedusha exists in Yiddishkheit” the rebbe added.

It is explained that the rebbe was directing his comments at members of Shas who broke away, expressing his disapproval of splitting the party by Eli Yishai. The rebbe maintained good relations with Rav Ovadia and was received warmly when he visited.