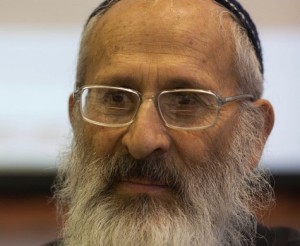 HaRav Shlomo Aviner Shlita is full of praise for the Yachad party, stating “The establishment of the party is a historical spiritual event”.

The rav explains that in day-to-day Israeli life members of the chareidi and dati leumi communities are not natural partners yet in Yachad we see them both along with representatives of Chabad and other walks of religious life. Rabbi Aviner explains that the message of unity in Yachad is not just an election slogan but reality and he feels many voters are thirsty for such a reality, one representing true achdus.

The rav continues, explaining the Torah belongs to all of us and it is not sectoral, “תורה צוה לנו משה מורשה קהילת יעקב”, stating he feels the non-religious are not truly non-religious but non-religious on the outside but they maintain the spark inside. Rabbi Aviner feels that in order to bring the Geula closer we are not required to create something that does not exist but more accurately, we must reveal that which does exist and he has had his share of parties that claim to consult with rabbonim but do not, that claim to follow in the path of Rav Kook ZT”L but do not, that claim to be based in Torah but are not, clearly alluding to Bayit Yehudi.

He concludes stating he loves all of Am Yisrael, including all of the political parties but he loves Yachad-The Nation is With Us party most of all.