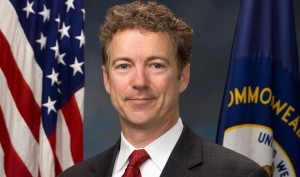 Sen. Rand Paul hasn’t yet declared his candidacy for president, but the Kentucky Republican already is finding the campaign trail to be a more uncomfortable place than the cloistered, tradition-bound Senate.

Out there, it’s a hard-to-control world where every misstep – real or perceived, and even a televised “shush” – rockets around the Internet. What Paul’s supporters see as feisty truth-telling is endlessly inspected for inaccuracies. He’s frustrated by what draws headlines instead of his work in the Senate, which has earned praise from once-wary colleagues in both parties.

Paul last week said of his prospective White House run: “Part of the decision making process is, `Do you have a chance? Is the message resonating? Do people believe that you can somehow win this? ` ”

“Because it’s not really a lot of fun.”

An ophthalmologist and father of three, Paul won election to the Senate in 2010 after defeating a candidate preferred by Washington Republicans in the GOP primary. In the past four years, he’s earned respect for his work ethic, his willingness to negotiate and his effectiveness as an advocate for his home state of Kentucky.

“I think Rand Paul has developed into a fine United States senator and has evolved over the last four years and is more pragmatic today than he might have been when he entered,” said Georgia Republican Sen. Johnny Isakson. “He’s a very thoughtful and pragmatic individual right now.”

Said Delaware Democratic Sen. Chris Coons, who has worked with Paul on privacy issues and ending blindness: “While we don’t agree on an awful lot of policy, I’ve never doubted that he came to Washington with certain ideals that he wanted to make progress on. I do think folks ought to give him more credit for his willingness to work across the aisle.”

That’s what Paul, 52, wants to talk about as he explores whether to run for president in 2016, he said in a recent interview. But the leap from the relative sanctuary of the Senate to the unending scrutiny of the campaign can test Paul’s patience, and at times, bring out the prickliest parts of his personality.

This past week, Paul has been aggressively demanding that Washington “audit the Fed,” or the Federal Reserve, a calling card issue for him as it was for his father, former U.S. Rep. Ron Paul. A portrait of father and son hangs in Paul’s office, but he bristled at questions about his dad, a Libertarian who ran for president as a Republican, and what he might take from Paul’s potential run in 2016.

“I think that would be a good question if I were 18 maybe, or something. I mean, I’ve been an adult and on my own for 30-some odd years, so I guess I’m not really used to thinking about my life in those terms,” Paul said. “I’ve been a physician, been a surgeon, been a leader. … I’ve been elected to the Senate for four years. I think I’m pretty much am able to stand on my own two feet and be judged for who I am.”

Controlling that narrative has become a priority for Paul after a season of misstatements – and, he says, mischaracterizations – on topics ranging from those in his own profession to public policy. On Thursday, for example, Paul referred to having earned a “biology degree” while speaking at a U.S. Chamber of Commerce event.

Critics jumped, noting that Paul doesn’t have an undergraduate degree. His office pushed back, pointing out that Paul is a graduate of Duke University’s prestigious medical school.

Paul recently told CNBC he had “heard of many tragic cases of walking, talking, normal children who wound up with profound mental disorders after vaccines.” He later said he only meant that vaccinations and disorders were “temporally” related, or connected by time.

He also suggested in October that the Centers for Disease Control was minimizing the risk of catching Ebola at, for example, a cocktail party. World health experts have been clear that Ebola is transmitted through direct contact with bodily fluids, particularly blood and vomit.

Such incidents lead Paul to spend time explaining and clarifying his own words, rather than talking about what he’d rather discuss. That frustration appeared to boil over late last month. He put a finger to his lips and “shushed” a female interviewer on CNBC, telling her to “calm down” when she challenged him on corporate tax policy. Paul said he felt interrupted.

John Paul Rollert, who teaches about leadership and presidential politics at Harvard Extension School, said this is a key period for Paul to test and hone patience and discipline. He’ll need to wait out the issues that bug him – “no matter how redundant or obnoxious” – long enough to deliver his message.

“It takes someone nearly superhuman to do that well, and I’m not convinced that Sen. Paul does that well yet,” Rollert said. “It’s a real liability for him, because it’s only going to get worse.”

It’s a challenge of running for president that Paul himself is not eager to talk about.

“To characterize that my life up here for four years has been about whether or not something’s accurate or inaccurate or controversies, I think, is to miss 99 percent of what I’m doing up here,” he said, before adding: “I attempt every day to present my views in a very honest and forthright way. And I think I achieve that.”