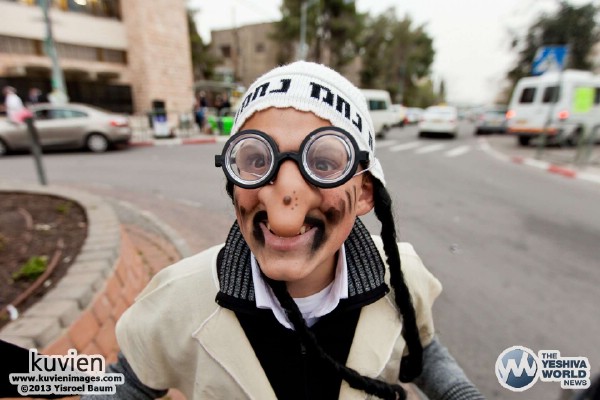 It is surely not one of our run-of-the-mill Minhagim.

Generally, our Minhagim deal with simanim – signs that indicate good mazel rather than bad fortune. They deal with eating or not eating specific foods- Example: Shvuos we eat milchigs, Chanukah – latkes, Rosh HaShana – honey. We don’t eat nuts or chrein during Yomim Noraim. Our other Minhagim deal with special Tefilos at special places:

Kaparos with chicken or money, Tashlich by the water.

But dressing up? Where and when did this come from?

The first mention of the notion of Jews dressing up in costume seems to be in the responsa of one of our Poskim from Italy, Rav Yehudah Mintz (Responsa #17). Rav Mintz lived in the late 1400’s and was niftar in Venice in 1508. The Teshuvah says that there is no prohibition involved in dressing up on Purim even in dressing like a woman – since the reason is for Simcha and not for the purpose of immorality – to violate Torah law. The Ramah quotes the Psak in Shulchan Aruch Orech Chaim (696:8).

Moritz Steinschneider, (1816-1907) the great bibliographer whose impact and opinions are still felt today, brilliant though he was, cannot fathom that the minhag developed independently. He attributes the development of the Minhag to the direct influence of the Roman Carnival. Carnival is a festive season which occurs immediately before the Catholic season of Lent. The Roman Carnival involved a public celebration and or parade that combined elements of a circus, the wearing of masks and public street partying. People would dress up in masquerade during these celebrations. Carnival is a festival traditionally held in Roman Catholic and, to a lesser extent, Eastern Orthodox societies. It originated in Italy and was held in February.

But our Minhag did not come from Roman Carnival. It is not that we believe that cultural diffusion does not exist. We do.

But its application must be tempered with rational precision and reason. We must always display a cautious intellectual approach. Scholars who know what Klal Yisroel is actually all about, know that this particular type of cultural diffusion is about as likely as eggnog consumption and Chrismas Carolling affecting the behavior of Yeshiva boys on a Purim.

It simply would not have happened. End of story. The apperception of the Roman Carnival in Torah circles was beyond the pale of acceptable activity even to mimic. This cannot be the source – especially so close to the time of Rav Yehudah Mintz, who sanctioned it’s use.

No, we must look for other sources in order to find truth. Steinschneider’s theory is just too pat. We must also bear in mind that silence in the Seforim and responsa literature does not necessarily indicate absence in normative Jewish practice. A Minhag could exist and yet not be mentioned in the Seforim or Teshuvos until much later.

The Apter Rebbe, Rav Avrohom Yehoshua Heschel, was known as the Ohaiv Yisroel. He writes (Ohaiv Yisroel Shmos Section on Parshas Zachor) that one of the reasons why we dress up in masquerade on Purim is to show that the miracle of Purim came from something that actually would have initially caused us much grief. This, says the Apter Rebbe, stresses that the greatest joy lies in the knowledge that the opposite result might very well have happened. A good theory, but one that, perhaps, may sound more likely to be a post-development rationalization than the original cause of the Minhag.

Rav Yitzchok Weiss zatzal, author of the Siach Yitzchok and student of the Shaivet Sofer, explains (Siman 380) that the origin of the custom to dress up in masks is to highlight the fact that Haman hid his hate for the Jewish people when approaching Achashveirosh for permission to destroy Klal Yisroel. Hashem responded, midah Keneged midah – measure for measure – by sending Eliyahu – disguised as Charvonah. Eliyahu too was hiding his real intent – to defend the Jewish people. Here, the idea of hiding, and a mask as a central theme of Purim seems likely. It may very well have been the idea that spurred on the Minhag in Klal Yisroel to wear masks.

The theme of hiding and its association with Purim, therefore, is found explicitly in the Gemorah itself. Could it have developed just then? Perhaps, but it is hard to imagine that it developed back then and no mention of this custom was made from 500 CE until the late 1400’s.

However, there is a Tosfos in tractate Rosh haShana (3a) that might be very enlightening here. The Tosfos deal with a fascinating episode in Parshas Chukas in the book of Bamidbar (21:1). The Cnaani in the Negev (the south) hear that Klal Yisroel has arrived and go out to do battle with them. Rashi identifies the incongruity. The Negev?? Why, that is Amalek!

Rashi’s conclusion is that it was Amalekites who spoke in the Cnaani dialect so that Klal Yisroel will pray to Hashem that the Cnaanim be handed over to them and not the Amelikes!

Our Tosfos, however, add more. They write that the Amalekits changed not only their voices and dialect, they changed their clothing too. They cite the person who wrote the piut for Parshas Zachor – Ksus VeLashon Shineh – Clothing and language he (or they) did change!

So here is the theory, then.

It is France and Germany, not Italy. The Paytan for Parshas Zachor has written that they changed their clothing – referring to the Amalekites. Jews see it. Parshas Zachor is close to Purim. Very close. Some regular people read the piut. They may think, perhaps, that it refers to Jews.. The scholars among them realize that it refers to Amalekites, but Haman is from Amalek anyway.

On Purim we are Marbeh BeSimcha. It is in the Piut. They begin to dress up, like Haman. The Minhag catches on. The Talmidei Cgachomim of Germany accept it.

Soon the practice travels to Italy. Steinschneider cannot resist and attributes it to the Roman Carnival. But he errs. It is much likelier that it came from the Piut for Parshas Zachor. The origin is a kasher minhag b’Yisroel from German-Jewry.

And now we go back to the Apter Rav – the Ohaiv Yisroel. He writes that one of the reasons why we dress up in masquerade on Purim is to show that the miracle of Purim came from something that actually would have initially caused us much grief. This, says the Apter Rebbe, stresses that the greatest joy lies in the knowledge that the opposite result might very well have happened. It is a Minhag that brings us ever closer to the true Dveikus Bashem and Simcha that lies at the heart of what Purim is all about.

Let us, with this in mind, remember the words of the Nesivus Shalom regarding drinking on Purim. He writes that the word “wine” is absent in the formulation of the Shulchan Aruch. “Chayav adam libsumei bePuraya ad delo yada.”

The reason is clear. We must become inebriated with the concept of Purim and not with wine. The concept of Purim is that Hashem is very close and that we can achieve remarkable Dvaikus Bashem at this time. No matter how distant we are – even if we are “Arur Haman” in terms of our general distance from Hashem– we can become, at this particular time of Purim, as close as Boruch Mordechai.

The nation of Israel can achieve a remarkable degree of real genuine Dveikus Bashem. We can do so like no other people can. When we dress up, therefore, let us appreciate the significance and the Taamim brought down by the Apter Rav, the Bnei Yissaschar and the Siach Yitzchok. This Purim, let us discover the talent that lies within us in this area. If we can do this, we can achieve both a personal Geulah as well as one for all of Klal Yisroel Amain.