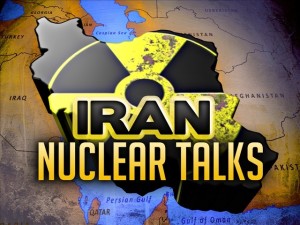 The Obama administration moved on two fronts Monday to advance its nuclear diplomacy with Iran, with talks between top U.S. and Iranian diplomats and an aggressive effort to sell the emerging deal to skeptical American lawmakers and constituencies.

U.S. Secretary of State John Kerry and Iranian Foreign Minister Mohammad Javad Zarif were to meet Monday in New York for the first time since world powers and Iran sealed a framework agreement on April 2 that would limit Iran’s ability to build a nuclear weapon. They now have little more than two months to meet their own deadline of June 30 for a comprehensive accord.

In Washington, lead U.S. negotiator Wendy Sherman told a conference of reform Jews that diplomatic collapse would leave Iran perilously close to nuclear weapons capacity. Energy Secretary Ernest Moniz said a final agreement would in some ways be tougher than what the U.S. has outlined thus far.

All the activity was taking place before Senate debate begins Tuesday over empowering Congress to review and possibly reject any nuclear pact. Republican presidential candidates are lining up to oppose any deal with a government the U.S. considers the world’s leading state sponsor of terrorism and to show their support for Israel.

Sen. Marco Rubio of Florida wants to require Iran’s leaders to publicly accept Israel’s right to exist, a nearly impossible mandate. Sen. Ted Cruz of Texas hopes to put the onus on advocates to win congressional approval of a deal, and not on opponents to gather enough votes for rejection.

Kerry and Zarif are reconvening after their marathon negotiations in Switzerland with several questions outstanding. Particularly problematic for President Barack Obama and his team are how quickly sanctions would be eased for Tehran in exchange for nuclear concessions, and how to snap economic restrictions back into place quickly if Iran is caught cheating.

At a breakfast meeting with journalists, Moniz, a former MIT physics department head, provided some new detail on the combination of technical limits that the U.S. says would keep Iran at least a year away from assembling enough fissile material for one nuclear weapon for at least a decade.

Hours after the framework was announced, the U.S. said Iran would be permitted to keep 6,104 centrifuges installed. Of these, a little more than 1,000 could be kept at Iran’s deeply buried facility at Fordo that may be impervious to U.S. or Israeli air attack. None of those would be permitted to enrich uranium, material that can be used in a nuclear warhead.

Moniz said no advanced centrifuges can be installed or developed at that site for 15 years. And in a new twist, he said only one-third of the 1,000 centrifuges there can actually “spin” over that period. The rest will be “just sitting there,” he said.

The details are significant because they provide another piece of how American officials calculate that they’d have enough time to detect any Iranian push toward a bomb and respond. Tehran says its program is solely designed for energy, medical and research purposes, but Washington and many other governments distrust Iran’s motives.

Nowhere does skepticism seem higher than on Capitol Hill, where lawmakers are wrestling with how tough to make legislation on Iran that has gained the tacit approval of Obama.

Proponents of the bill are trying to discourage any changes to the legislation. They recognize that politically driven amendments could undermine Democratic support and sink the carefully crafted measure.

“Anybody who monkeys with this bill is going to run into a buzz saw,” Republican Sen. Lindsey Graham of South Carolina, a possible White House candidate, warned ahead of this week’s debate.

Sherman, the State Department’s undersecretary for political affairs, said that if talks fail to produce a final deal, Iran would be two to three months from being able to produce enough material for a weapon.

Speaking to the Religious Action Center of Reform Judaism in Washington, she said the president would reconsider support for the bill if it is distorted by amendments. “There will be a lot of pretty awful amendments, quite frankly, and we’ll see where we end up,” Sherman said.

The bill was approved 19-0 by the Senate Foreign Relations Committee. It has 62 co-sponsors from both parties.

The legislation would block Obama from waiving congressional sanctions for at least 30 days while lawmakers weigh in. And it would stipulate that if senators disapprove the deal, Obama would lose authority to waive certain economic penalties — an event that would certainly prompt a presidential veto.

Among proposed additions to the bill are demands that Iran release any U.S. citizens it is holding and refrain from any cooperation with nuclear-armed North Korea. Another insists that any agreement be treated as an international treaty, requiring two-thirds ratification by the Senate.

Another set of amendments would block any sanctions relief for Iran until it meets goals the U.S. set years ago as negotiating stances and has long since abandoned.