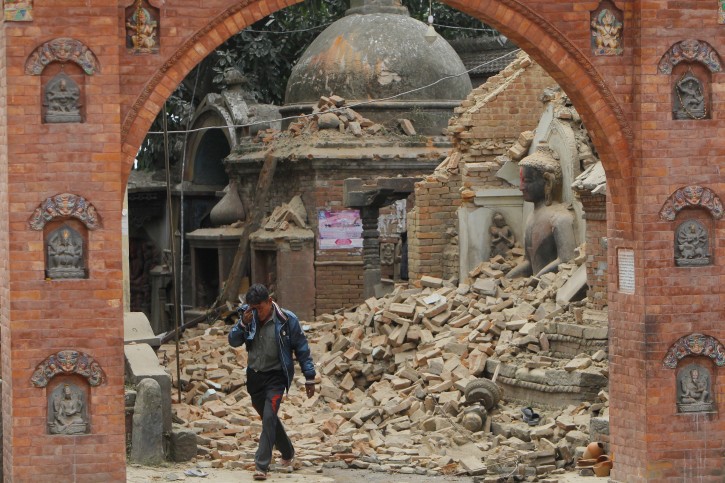 Hands pressed together in supplication, the Nepalese women pleaded for food, shelter and anything else the helicopter might have brought on an in-and-out run Wednesday to this smashed mountain village near the epicenter of last weekend’s mammoth earthquake that killed more than 5,000 people.

Unlike in Nepal’s capital, where most buildings were spared complete collapse, the tiny hamlets clinging to the remote mountainsides of Gorkha District have been ravaged. Entire clusters of homes were reduced to piles of stone and splintered wood. Orange plastic tarps used for shelter now dot the cliff sides and terraced rice paddies carved into the land.

“We are hungry,” cried a woman who gave her name only as Deumaya, gesturing toward her stomach and opening her mouth to emphasize her desperation. Another woman, Ramayana, her eyes hollow and haunted, repeated the plea: “Hungry! We are hungry!”

But food is not the only necessity in short supply out here beyond the reaches of paved roads, electricity poles and other benefits of the modern world. These days, even water is scarce. Communication is a challenge. And modern medical care is a luxury many have never received.

Gumda is one of a handful of villages identified as the worst hit by Saturday’s 7.8-magnitude earthquake, from which it will almost certainly take years to recover.

As in many villages, though, the death toll in Gumda was far lower than feared, since many villagers were working outdoors when the quake struck at midday. Of Gumda’s 1,300 people, five were killed in the quake and 20 more were injured.

As the helicopter landed Wednesday with 40-kilogram (90-pound) sacks of rice, wind and rain whipped across the crest of the mountain. Seeing the conditions, the U.N. World Food Program’s Geoff Pinnock shouted over the roar of the propellers, “the next shipment has to be plastic sheets. These people need shelter more than they need food.”

About 200 villagers huddled under a few umbrellas and plastic tarps as they waited to receive the aid, some with runny noses and chattering teeth. With the erratic Himalayan weather, aid workers are worried about keeping people warm, fed and safe.

With 8 million Nepalese affected by the earthquake, including 1.4 million needing immediate food assistance, Pinnock said the relief effort would stretch on for months.

“It doesn’t happen overnight,” he said.

Nepalese police said Wednesday the death toll from the quake had reached 5,027. Another 18 were killed on the slopes of Mount Everest, while 61 died in neighboring India, and China’s official Xinhua News Agency reported 25 dead in Tibet.

The disaster also injured more than 10,000, police said, and rendered thousands more homeless. The U.N. says the disaster has affected 8.1 million people — more than a fourth of Nepal’s population of 27.8 million — and that 1.4 million needed food assistance.

Planes carrying food and other supplies have been steadily arriving at Kathmandu’s small airport, but the aid distribution process remains fairly chaotic, with Nepalese officials having difficulty directing the flow of emergency supplies.

About 200 people blocked traffic in the capital Wednesday to protest the slow pace of aid delivery. The protesters faced off with police and there were minor scuffles but no arrests were made.

But in a sign that life was inching back to normal, banks in Kathmandu opened for a few hours Wednesday and stuffed their ATMs with cash, giving people access to money.

Thousands of people lined up at bus stations in the capital, hoping to reach their hometowns in rural areas. Some have had little news of family and loved ones since Saturday’s quake. Others are scared of staying close to the epicenter, northwest of Kathmandu.

“I am hoping to get on a bus, any bus heading out of Kathmandu. I am too scared to be staying in Kathmandu,” said Raja Gurung, who wanted to get to his home in western Nepal. “The house near my rented apartment collapsed. It was horrible. I have not gone indoors in many days. I would rather leave than a live a life of fear in Kathmandu.”

In some heartening news, French rescuers freed a man from the ruins of a three-story Kathmandu hotel more than three days after the quake. Rishi Khanal, 27, said he drank his own urine to survive.

Khanal had just finished lunch at a hotel on Saturday and had gone up to the second floor when everything suddenly started moving and falling. He was struck by falling masonry and trapped with his foot crushed under rubble.

“I had some hope but by yesterday I’d given up. My nails went all white and my lips cracked … I was sure no one was coming for me. I was certain I was going to die,” he told The Associated Press from his hospital bed on Wednesday.

Khanal said he was surrounded by dead people and a terrible smell. But he kept banging on the rubble all around him and eventually this brought a French rescue team that extracted him after being trapped for 82 hours.