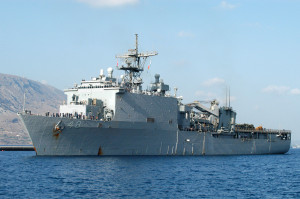 U.S. Navy ships will begin accompanying U.S. commercial ships during their transit through the Strait of Hormuz at the mouth of the Persian Gulf to ensure they encounter no interference from Iran, U.S. defense officials said Thursday.

The new policy, which has not yet been announced officially, was adopted in response to what Washington views as provocative Iranian behavior. Earlier this week Iran Revolutionary Guard Corps naval vessels reportedly fired warning shots near a Marshall Islands-flagged cargo ship and have detained it and its crew.

Iran says it intervened with the Maersk Tigris because the Maersk shipping line owes it money awarded in a lawsuit.

Iranian naval patrol boats also surrounded a U.S. cargo vessel in the strait last Friday before departing without further incident. The Pentagon later said it considered the incident a provocation.

The strait is narrow and partially within Iranian territorial waters. Under an internationally recognized protocol called “innocent passage,” maritime traffic is permitted to pass through the strait without interference, even if ships at times are in Iranian territorial waters, so long as they are not violating strictures against such things as carrying weapons or collecting intelligence.

U.S. defense officials said the decision to begin accompanying U.S. commercial vessels as they transit the strait was based on a recommendation by U.S. Central Command, which is responsible for U.S. military operations in the Middle East.

Defense Secretary Ash Carter was briefed on the decision, one official said, adding that the Obama administration does not want the move to be seen as provocative, given the delicate state of the Iran nuclear agreement. The pact has yet to be finalized and is the subject of intense scrutiny and considerable criticism in Congress.

The officials were not authorized to discuss the decision publicly and spoke anonymously.

At an unrelated Pentagon news conference, Air Force Gen. Philip Breedlove was asked about the decision and said he was aware of it. Breedlove, the top U.S. commander of NATO in Europe, said the Navy is well-practiced at protecting freedom of navigation in the Gulf.

“It is a mission they have done in the past,” he said.

The Navy makes a distinction between accompanying ships and escorting them, although the difference appears to be small. The officials said U.S. Navy ships will be present in and near the Strait of Hormuz while U.S. commercial vessels are in transit, but they will not escort them continuously.

The 5th Fleet, which is the naval arm of Central Command, currently has a destroyer, the USS Farragut, in the Gulf, as well as three smaller coastal patrol ships. No additional ships are being dispatched to the region, one official said.

U.S. Navy ships will be in continuous radio contact with the commercial ships and possibly will stay in visual contact during their transit of the strait, the officials said. The U.S. commercial shipping companies will be notified in advance of these new procedures.

One official said the new approach will be reviewed daily, taking into account Iranian behavior.

The circumstances of Iran’s seizure earlier this week of the MV Maersk Tigris remain unclear. A spokesman for the Danish shipper, Michael Storgaard, said the company learned Thursday that an Iranian appeals court had ruled the company must pay $3.6 million for a 10-container cargo delivered a decade ago on behalf of an Iranian company in Dubai, United Arab Emirates. However, the cargo never was collected, according to Storgaard, adding it eventually was disposed of by local authorities.

Storgaard said Copenhagen-based Maersk Line will “do everything we can to resolve this matter” with Iranian authorities.

He added the ship and crew aren’t theirs. MV Maersk Tigris, operated by Rickmers Ship Management in Singapore, was boarded on Tuesday.