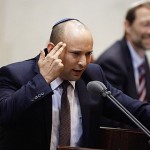 Today, Wednesday 17 Iyar 5775, is the final day on the mandate permitting Prime Minister Binyamin Netanyahu to assemble his coalition. The deadline expires at midnight.

With Kulanu, Yahadut Hatorah and Shas on board, amid the awareness Yisrael Beitenu is not entering the coalition, the ball remains in Bayit Yehudi’s court. On the one hand, Naftali Bennett has never before found himself in such a position of power, On the other hand, if he decides not to enter the coalition he will be viewed as responsible for Netanyahu not forming a right-wing government.

The prime minister’s decision to give the Ministry of Religious Services to Shas was one insult too many for Bennett, who instructed his people to cut all ties with Likud as a result. Bennett reportedly has ignored phone calls from Likud negotiators throughout the day on Tuesday, but not before announcing once again that he want to become foreign minister.

Most believe this is a dream more than a reality for Bennett for a number of reasons. For one thing, the prime minister is holding the Foreign Ministry portfolio for the possible entry of the Labor or Yisrael Beitenu parties in the coming months. Some opine that with some IDF officials predicating another round of warfare with Hamas in the coming months, this will open a door for Labor to enter into an emergency coalition and the Foreign Ministry slot will be ready and waiting. In addition, the prime minister does not want to see Bennett in such a senior cabinet post.

Late Tuesday night Bayit Yehudi released another request, that Ayelet Shaked must become minister of justice instead of the Culture & Sport Ministry that is offered to the party.

Likud officials signal to the media that this too will not occur, but they admit the prime minister will have to compromise at some point. It is unclear what this means but with the clock running down, it will not take too long until the matter is clarified.

Seeking to increase the pressure on the prime minister, Bayit Yehudi’s message to the media is the party is giving serious consideration to entering the opposition, which means PM Netanyahu will have to cut a last-minute deal with the Labor party or inform the president that he is unable to form a coalition.

It should be pointed out that while the deadline is midnight, the prime minister has the right to inform President Reuven Rivlin that he has made significant progress with Bayit Yehudi and he will be able to present his coalition in the coming days, until Tuesday, 23 Iyar. However the president has the option to give the mandate to form a coalition to another party.