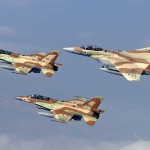 According to Arab media reports, the Israel Air Force attacked a weapons storage facility in the area of Khartoum, Sudan. The attacked reportedly took place during the night, Tuesday to Wednesday 17 Iyar 5775.

In July 2014, during Operation Protective Edge, a large explosion resulted in the destruction of a weapons plan in northern Khartoum. Sudanese officials reported there was a fire in the building but some Arab media reports pointed to Israeli involvement.