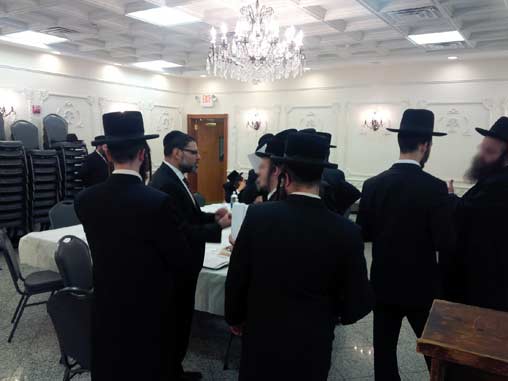 In a quiet, yet electrified, meeting held in the Beis Medrash of Monsey on Sunday, 7 Iyyar, an outstanding group of chassidishe yungerleit and their wives committed themselves to join a new Kollel being established in Baltimore, Maryland, which is set to open on Rosh Chodesh Elul, 5775.

This dedicated group of kollel men and their families will be joining K’hal Chassidim of Baltimore in the inauguration of the “Kollel Le’Horoah,” headed by the Rav and Rosh Kollel of the Chassidishe Kollel of Baltimore, HoRav Hershel Rosenfeld.

Rabbi Rosenfeld has decades of experience in chinuch and rabbanus. He was Rosh Kollel of the Sadigura Kollel in Eretz Yisroel; a Dayan in the Beis Din Mechon Le’Horoah in Monsey (HoRav Ezriel Tauber); a mechanech in the Belz Mosdos in Monsey and – most recently – Rosh Yeshiva and Menahel Ruchni of Mosdos Nadvorna in Bnei Brak for 15 years. Rabbi Rosenfeld has smicha from numerous gedolim, including the Makover Rov, the Debretziner Rov and HoRav Wosner, zt’l, and lhbch’l, HoRav Roth (Belzer Dayan), the Pupa Rov and the Klausenberger Dayan, shlit’a.

Rabbi Rosenfeld began recruitment for the Kollel last summer and since then has made numerous trips to Monsey, Boro Park and Williamsburg to meet with prospective candidates.  He has also visited Baltimore on a number of occasions, and met with the Rabbonim there, including Rabbi Moshe Heinemann (Agudath Israel of Baltimore), Rabbi Yaakov Hopfer (Shearith Israel / Glen Avenue Shul), Rabbi Yissochar Dov Eichenstein (Mercaz Torah U’Tefillah of Baltimore), Rabbi Sheftel Neuberger (Yeshivas Ner Israel), and many others. 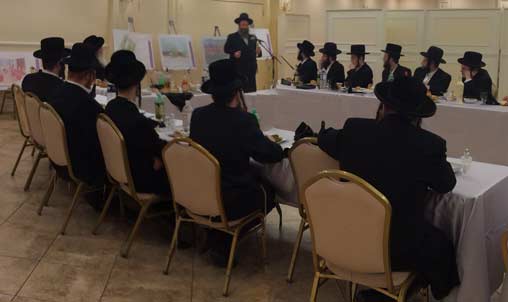 The Kollel, to be housed in a warm and welcoming chassidishe Beis Medrash and soon to be ensconced in a new building, is slated to be at the epicenter of a growing chassidishe community in the Upper Park Heights neighborhood of Baltimore.

According to Rabbi Rosenfeld, the Kollel’s goal is to, “build up Rabbonim” from yungerleit through an intensive five-year learning program.  The yungerleit of the Kollel are comprised of chassidishe b’nei Torah who have learned in many of the most prestigious Yeshivos in the world, including Me’or Yitzchok, Ohr Yisroel, Tchebin, Emek HaTalmud and the Mirrer Yeshiva in Yerushalayim. Rabbi Rosenfeld explained that learning is paramount for these yungerleit, who strive to grow in Chassidus and yiras shomayim.

The Executive Director of the Kollel, Rabbi Y. Zvi Weiss, who is and has been a Rov in Baltimore for 15 years at Bais HaKnesses Ohr Hachaim, has been instrumental in bringing the Kollel to this point, after many years of planning and months of hard work.  Rabbi Weiss, grew up in Boro Park, attended Yeshivas Karlin Stolin, Beis HaTalmud, Brisk and Lakewood, and is uniquely positioned to facilitate the growth of the chassidishe Kollel in the larger Baltimore community.

“The palpable excitement among this group of metzuyanim – in learning and middos – is evident,” Rabbi Weiss said after the “Signing Asifa.”  He explained further that “we had a prior asifa before Pesach to get to know each other as a group, and since that time, the yungerleit have come together to meet and become familiar with each other, and they have all visited Baltimore one or more times.”  The Baltimore kehillah has hosted Kollel families for Shabbosim throughout the winter, already igniting a warm relationship and infusing excitement and anticipation in the community.

Members of the Baltimore community – including the kinderlach – are excited as well, and are awaiting the Kollel and Beis Medrash with anticipation.  One futuremispallel in the Beis Medrash commented, “I cannot wait for the Chassidishe Kollel to open!   My sons ask me constantly when they will be able to be a part of the shul.”  Many are already planning on learning and davening in the Beis Medrash together with the Kollel yungerleit, who were hand-picked by Rabbi Rosenfeld and thehanholah of the Kollel.

The Kollel looks forward to inviting leading local, national and internationally-renowned Rabbonim to address the yungerleit and the members of the Kehilla in matters of halocha.  The Kollel plans to create learning opportunities for members of the Baltimore community, including establishing yarchei kallah and morning and evening learning.

For further information about the Kollel, inquiries may be sent to [email protected] or by calling 410-764-3200.