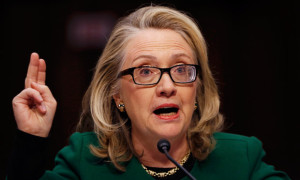 Millions of dollars in foreign money sloshing around a presidential candidate, even in the name of helping the world’s poor, is bound to spill over into controversy.

And doubly so when it comes to the Clintons, America’s two-for-the-price-of-one political family.

The former president channeled his energy and worldwide connections into a new charity, first called the William J. Clinton Foundation, when he left the White House in 2001. It takes on global poverty, AIDS and other health threats, climate change, childhood obesity and issues affecting women and girls around the world.

In 2013, shortly after former first lady Hillary Rodham Clinton left her post as secretary of state, the name was officially expanded to the Bill, Hillary and Chelsea Clinton Foundation. Daughter Chelsea is vice chair of the board.

The tax-exempt nonprofit has raised more than $2 billion for its efforts. It also gets corporations and foreign governments to pump money directly into projects around the world, through the Clinton Global Initiative.

WHERE DOES THE MONEY COME FROM?

Wealthy individuals, foreign nations, corporations and political supporters of Hillary Clinton are among the biggest givers. Some have donated millions of dollars.

Before taking office as President Barack Obama’s top diplomat in January 2009, Clinton agreed to begin disclosing the names of the foundation’s donors, to address the new administration’s ethical concerns. She also said the foundation wouldn’t take new foreign-government donations without the approval of the State Department ethics office, to avoid an appearance of a conflict of interest.

Foundation officials recently acknowledged at least one foreign donation during Clinton’s tenure — $500,000 from Algeria for Haitian earthquake relief — was accepted without seeking State approval. They said it was by mistake.

When Clinton stepped down from her government post in February 2013, foreign donations resumed flowing freely, even as she was widely viewed as a future presidential candidate.

At least 16 nations together have given between $55 million and $130 million, according to an Associated Press analysis of contribution ranges provided by the foundation.

After Clinton officially joined the 2016 presidential field in April, the board announced that it would stop accepting donations from most foreign governments. Officials said they would still take money from six Western nations — Australia, Canada, Germany, the Netherlands, Norway and the United Kingdom — already financing major programs.

The foundation also said it would begin releasing its donor list quarterly, instead of only once per year.

Clinton resigned from the board when she launched her campaign.

WHAT ARE THE CLINTONS’ CRITICS SAYING?

— The foundation can serve as a backdoor for governments or foreign citizens hoping to influence a future president. U.S. law bans political campaigns from accepting foreign money.

— Many big donors to the foundation also lobbied the State Department while Clinton was in charge.

— Despite pledges of transparency, names of foreign donors who contributed through a Canadian affiliate of the foundation haven’t been made public.

— Some of the foreign sums are mind-boggling. Canadian mining billionaire Frank Giustra, founder of the Canadian affiliate, has given the Clinton Foundation more than $31 million. Ukrainian billionaire Victor Pinchuk and the country of Saudi Arabia each gave between $10 million and $25 million, according to the foundation.

— A new book, “Clinton Cash,” by Peter Schweizer, says the timing of some foreign donations coincides with favorable decisions by U.S. officials, suggesting the possibility of influence-selling. The book points, for example, to government approval of the sale of a uranium mining company Giustra invested in, including its American mines, to the Russian atomic energy agency. Giustra says he had sold his stake by then.

— Donations from Saudi Arabia, the United Arab Emirates and other Mideast nations that deny women equal rights have been criticized by Republican presidential candidates. Sen. Rand Paul said promoting women’s rights while taking millions from countries where “rape victims are publicly lashed” is “a grand hypocrisy.”

— Many of the foundation’s donors are companies and organizations that also paid Bill Clinton six-figure speaking fees while his wife was secretary of state. And several are big contributors to Hillary Clinton’s political campaigns.

— Clinton’s husband and daughter are still on the foundation board, leaving an opening for conflicts of interest. Bill and Chelsea Clinton just wrapped up a nine-day trip to Africa to highlight their charity’s good works. The former president said he would consider stepping down if his wife wins her own term in the Oval Office.

WHAT DO THE CLINTONS SAY?

Hillary Clinton hasn’t personally responded to specific allegations. She dismissed the criticism generally as the kind of “distractions and attacks” to be expected during a presidential campaign.

Her campaign website calls the book “Clinton Cash” the work of a Republican operative making “wild accusations” with no evidence.

Bill Clinton says he’s proud of his foundation’s work, and that 90 percent of donors give $100 or less.

And the big money? There’s nothing “sinister” about getting wealthy people and nations to help the poor in developing countries, Clinton said in an NBC News interview.

“There’s been a very deliberate attempt to take the foundation down,” he said. “And there’s almost no new fact that’s known now that wasn’t known when she ran for president the first time” in 2008.

The State Department said last month that officials conducted a review and found no evidence that any of Clinton’s actions as secretary of state were influenced by donations to the foundation.

Ex-presidents typically have foundations raising money for their presidential libraries, with a focus on education and historical research. Bill Clinton has a library, too.

The Clinton Foundation is more like Jimmy Carter’s nonprofit center, which works for human rights, promotes peace and fights diseases in poor countries. The Carter Center accepts donations from foreign governments and corporations.

A big difference: Carter and his wife, Rosalynn, are no longer in politics.