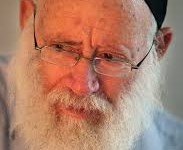 Rabbi Moshe Levinger, who was viewed by most as the father of the rebuilding of Hebron and the settlement movement was niftar on Shabbos at the age of 80.

The rav was a talmid of Rabbi Tzvi Yehuda Kook ZT”L and Rabbi Avraham Shapira ZT”L. In his younger days Rabbi Levinger also served as rav of the communities of Kibbutz Shalavim and Moshe Nachalim. However, since heading a group of Jews who held Pesach Seder in Hebron in 1968, the famous Park Hotel Seder, he remained dedicated to resettling and restoring the Jewish presence in the holy city.

The rav was moser nefesh for rebuilding Hebron, which became his life’s work. An effort to enter Knesset in 1992 failed as his party did not earn a sufficient number of votes to pass the minimum threshold. The niftar was a recipient of the prestigious Moskowitz Prize in 2013.

Rabbi Levinger is survived by his wife Miriam and 11 children and their families.

The levaya will begin today, Sunday, 28 Iyar at 12:30 from the Ma’aras HaMachpelah and kvura will be in the Ancient Hebron Cemetery.