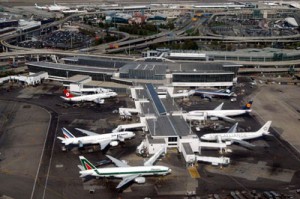 The New York City area’s three major airports rank the worst in the country for the percentage of flights delayed on the tarmac at takeoff and landing, according to the Global Gateway Alliance. The organization advocates for improvements to airports and related infrastructure.

The study found LaGuardia, JFK and Newark were the top three airports in the country during 2014 with the highest rate of tarmac delays lasting between 61 and 300 minutes, the measure used by the FAA.

At nearly 2,500 tarmac delays, LaGuardia had the highest percentage of flights disrupted. JFK saw an even greater number of flights facing the hours-long delays, at 2,660. Newark’s tarmac delays accounted for over 1,600 flights.

The report says about 660,000 passengers were affected.

It urges the Federal Aviation Administration to speed up use of so-called NextGen satellite-based technology to reduce the runway backlog.

The Port Authority of New York and New Jersey didn’t immediately respond to a request for comment.