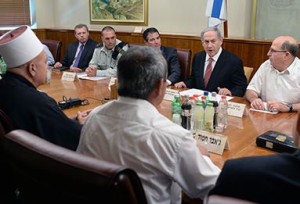 During his meeting with community leaders the prime minister said “Your sons, all of our sons, serve and fight in the IDF and defend our state. We all uphold the law and we are all loyal citizens. And if there is someone who deviates from these rules and takes the law into his hands, it is our duty, of course, to condemn this and see to it that these offenders do not become the norm. This is something that we must prevent – the recurrence of such events.

“I think that it is also especially important to prevent attacks on IDF soldiers or hindering them as they carry out their missions. We have been successful in keeping Israel out of the anarchy that is happening around us. We did so because we always knew measure things and act prudently. This is, and will remain, our policy.

“However, I would also like to say a personal word to the community. I appreciate the community, its actions, its contribution to the state in general and to the security of the state in particular. I gave expression to this only recently in the five-year plan that allocates 2 billion NIS. This is a practical expression of this appreciation and of the understanding that we have a commitment to our Druse brothers as citizens of the State of Israel in the fullest sense of the word – not just equal rights but also full involvement in the life of the state. Out of this respect, partnership and brotherhood, I ask that we work together, as we have up until today, to ensure the security of the state and orderly operation of the IDF and our security arms – in every respect and in every place. I thank you for coming.”

The spiritual leader of the Druse community in Israel Sheik Muafaq Tarif, said, “We have the honor, Mr. Prime Minister, of coming to you. We know what you are doing. We know about the understanding and wisdom with which you leading on this issue. I am very familiar with everything that you are doing on behalf of the state and the community. We thank you also for the five-year plan. After what happened, we convened at the tomb of Jethro, Nebi Shueib, all of the community’s religious leaders, local council heads and MKs and condemned what happened. We are all together and we have the honor that our sons serve in the IDF, and we are part of the IDF, and we will not lend a hand to those who would harm the IDF, whoever they may be. Of course, we condemned what happened. Our faith, traditions and values are against attacking an ambulance or the injured. This is not our way. We did not educate for this. We strongly condemn what happened and of course we hope that you will continue to wisely and prudently lead on this issue. We are at your service.”