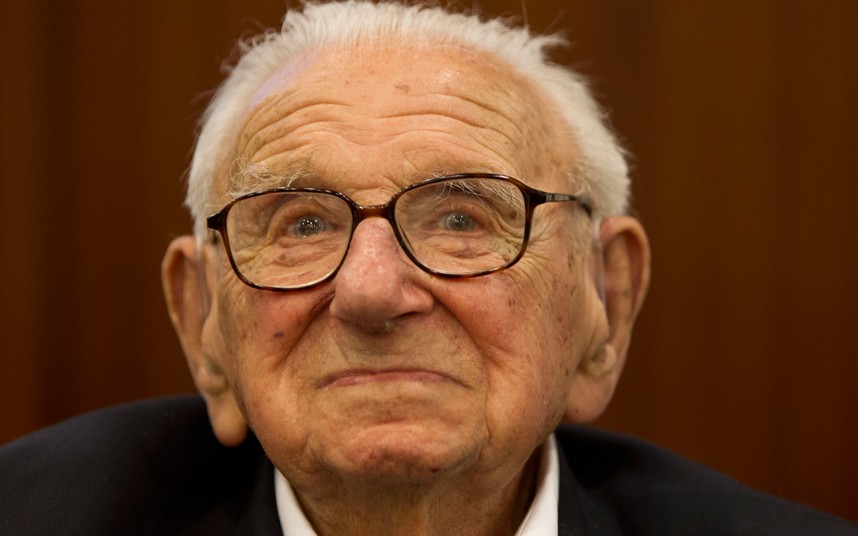 “Is there anyone in our audience tonight who owes their life to Nicholas Winton?” asked the presenter of the popular BBC magazine program “That’s Life”.

Around the elderly man, sitting with his wife in the front row of the audience, more than 30 people got to their feet. The man stood to acknowledge them, wiping tears from his eyes.

It was 1988, some 50 years since young stockbroker Nicholas Winton found himself in Prague as the Nazis marched on Czechoslovakia and all around him Jewish parents desperately looked for a means of escape, if not for themselves then at least for their children.

Virtually single-handedly, Winton saved more than 650 of those children from almost certain death in the Holocaust. But he didn’t talk about it for decades, until his wife discovered documents in their attic that revealed the story and for the first time allowed the rescued children to know and thank their savior.

“There are all kinds of things you don’t talk about, even with your family,” Winton said later. “Everything that happened before the war actually didn’t feel important in the light of the war itself.”

Winton’s death Wednesday at the age of 106 brought tributes from leaders and Jewish groups in Britain, the Czech Republic and Israel.

“In a world plagued by evil and indifference, Winton dedicated himself to saving the innocent and the defenseless. His exceptional moral leadership serves as an example to all humanity,” Israeli Prime Minister Benjamin Netayahu said Thursday.

“Winton knew how to correctly read the harsh reality and chose to leave his comfortable life and follow the voice of his conscience,” added Avner Shalev, chairman of the Yad Vashem Holocaust memorial in Jerusalem.

The story of Winton’s exploits led former British Prime Minister Tony Blair to dub him “Britain’s Schindler”, in reference to the German businessman Oskar Schindler, who famously saved Jewish lives during the war.

Returning to Britain and finding there was no one working on the problem of how to get the children out, Winton borrowed the headed paper of the British Committee for Refugees from Czechoslovakia and underneath typed the words “Children’s Section.”

He approached the British government, and eventually got a promise that it would let the children in, provided he had a foster home arranged for each of them, and upon payment of a guarantee â the substantial sum of 50 pounds per child.

He drew up lists of some 6,000 suitable children, publishing their photographs to try to encourage British families to agree to take them. He arranged trains from Prague to the Netherlands, ferries to take the children across the North Sea.

Eight trains and one plane carried 669 children to Britain in the months before the outbreak of war. The largest evacuation was scheduled for Sept. 3, 1939, the day Britain declared war on Germany. That train never left, and almost none of the 250 children trying to flee that day survived the war.

“At the time, everybody said, ‘Isn’t it wonderful what you’ve done for the Jews? You saved all these Jewish people,'” Winton said. “When it was first said to me, it came almost as a revelation because I didn’t do it particularly for that reason. I was there to save children.”

The children from Prague were among some 10,000 mostly Jewish children who made it to Britain on what were known as the Kindertransports (children’s transports). Few of them would see their parents again.

Though many more children were saved from Berlin and Vienna, those operations were better-organized and better-financed. Winton’s operation was unique because he worked almost alone.

He also acknowledged that not all the children who made it to Britain were well-treated in their foster homes, and some foster parents used them as cheap domestic servants. He also faced criticism in some quarters for placing Jewish children with Christian families.

“I wouldn’t claim that it was 100 percent successful, but I would claim that everybody who came over was alive at the end of the war,” he said, quoted in the book “Into the Arms of Strangers.”

After the story came to light, Winton’s wife Grete persuaded him to talk about what had happened, and many of the children â now parents and grandparents themselves â contacted him to thank him for saving their lives. Among the well-known people saved by Winton were American scientist Ben Abeles, British film director Karel Reisz and Canadian journalist Joe Schlesinger.

A film about his heroism by Slovak director Matej Minac, “Nicholas Winton â The Power of Good,” won an International Emmy Award in 2002. Minac made a second documentary, “Nicky’s Family”, in 2011.

Winton was knighted by Queen Elizabeth II in 2003 and also honored in the Czech Republic. A statue of Winton stands at Prague’s central station â candles and flowers surrounded it on Thursday â while a statue commemorating the children of the Kindertransport is a popular sight at London’s Liverpool Street Station. He continued to attend Kindertransport events in Britain and the Czech Republic well beyond his 100th birthday.

Winton served in the Royal Air Force during the war and continued to support refugee organizations. After the war, he became involved in numerous other charitable organizations, especially in his home town of Maidenhead, west of London. He was president of the Maidenhead branch of the learning disability charity Mencap for more than 40 years until his death, and worked with the Abbeyfields organization to set up homes for the elderly in the town â two of which are named Nicholas House and Winton House.

A keen fencer who lost his chance to compete at the Olympics because of the outbreak of war, Winton worked with his younger brother Bobby to found the Winton Cup, still Britain’s main team fencing competition.

Winton’s wife died in 1999. He is survived by his son Nicholas and daughter Barbara.

Techum Shabbos: Where Do I Begin?

Emirates Airlines To Produce Its Own Kosher Meals, Israeli & Dubai...