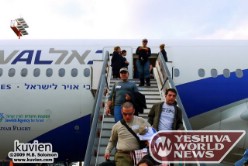 Exactly one year after Operation Protective Edge, 221 new immigrants from the United States and Canada will arrive in Israel on Tuesday, 27 Tammuz (July 14), at Tel Aviv’s Ben-Gurion Airport to begin their new lives in Israel. The special charter aliyah flight is being organized by Nefesh B’Nefesh in cooperation with Israel’s Ministry of Aliyah and Immigrant Absorption, the Jewish Agency for Israel, Keren Kayemet and JNF-USA.

Altogether, 32 families and 53 singles from 14 states, the District of Columbia and four provinces across the US and Canada will be on this landmark flight. Among the Olim are 95 children – 49 girls and 46 boys – who are immigrating with their parents. About one quarter of the Olim arriving on the flight have decided to settle in Israel’s periphery as part of the Nefesh B’Nefesh and Keren Kayemet’s Go North and Go South programs.

During 2015, more than 4,000 olim are expected to make Aliyah from North America, 2000 of them will arrive over the course of the summer months.

An arrival ceremony for the Olim will take place at Ben-Gurion Airport’s Terminal 1 (Gate 8). The flight is scheduled to touch down at 06:15.