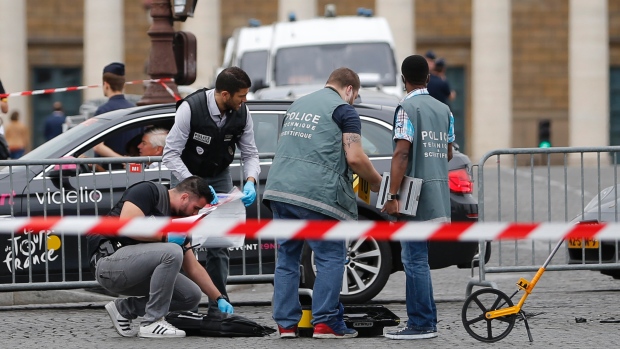 Paris police were searching for a car that struck a taxi and crashed through barricades set up near the Tour de France finish line on Sunday morning, drawing police fire hours before the arrival of the cyclists and spectators. Police said they didn’t suspect terrorism.

The car escaped with at least two occupants who were apparently unharmed after police opened fire on the vehicle in the Place de la Concorde, where the cyclists make their final triumphant rounds to conclude the race, said a union police official and a government official with knowledge of the incident.

Tour de France officials said the race wouldn’t be affected by the incident. Paris has been on edge since double attacks in January by Islamic extremists on the French satirical newspaper Charlie Hebdo and a Kosher grocery killed 20 people, including the three attackers. Thousands of police and soldiers were deployed on the streets after the attack to protect sensitive sites and tourists attractions.

The official said police saw little chance of links between Sunday’s incident and the Tour de France, or terrorism, but cautioned that prudence was necessary as long as the car’s occupants were on the loose. The official said the running hypothesis was that the car’s occupants had left one of the nightclubs in the ritzy neighborhood, were intoxicated or had taken illegal substances and didn’t want to submit to a police check.

The official said the car was first spotted on a street that feeds into the nearby Champs-Elysees, the famed avenue where thousands gather to watch the final laps of the Tour de France, and where crowd control barriers were being put in place.

The car skirted the area and struck a taxi at the Place de la Concorde near the start of the Tuileries Gardens, the official said. Police officers then opened fire.

The official provided details on condition he not be identified because an investigation was ongoing.

It is extremely rare for gunfire to be heard at the Place de la Concorde, a luxury tourist haunt across the Seine River from the National Assembly, the lower chamber of the French Parliament.

Luc Poignant, spokesman for the SGP police union, said officers were finishing setting up the barricades for the race when the car tried to crash through the barriers. Officers opened fire on the car, which ultimately drove away. Poignant told the BFM television network that no officers were injured.

Hundreds of thousands of people gather in the Place de la Concorde and the Champs-Elysees for the race’s final leg.