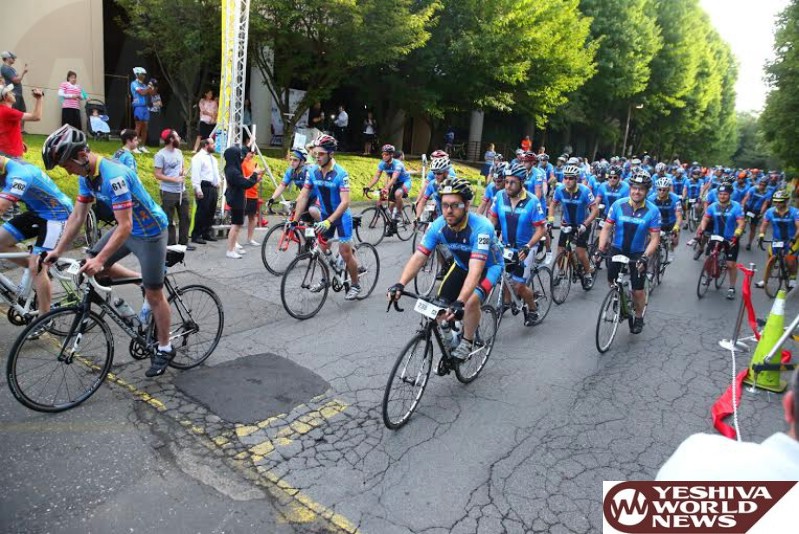 On Wednesday morning, 400 cyclists from across the United States and Canada clipped their shoes into bicycle cleats and began to cycle 180 miles from Stamford, CT, to the Catskill Mountains to raise money for a camp for sick children.

Bike4Chai has raised a whopping $5.5 million for Camp Simcha, an overnight summer camp for children with cancer, chronic conditions, genetic illnesses and disabilities, and the organization that runs it, Chai Lifeline. Chai Lifeline is an international children’s health support network that provides dozens of programs and services that enable sick children and their families to cope with the emotional, social, and financial impact of serious pediatric illness.

Over two days, the riders will climb approximately 13,000 feet and cycle 180 miles in three states to reach their destination. Cyclists will never be alone on their arduous trek: Bike4Chai has complete SAG support and fully stocked rest stops along the way.

The event began on Tuesday evening, at the Pomegranate Pasta Party at the Stamford Plaza Hotel in Stamford, CT.

The riders will cross the “world’s greatest finish line” together at Camp Simcha in Glen Spey, New York, on Thursday, August 6 at 2:00 PM, where they will celebrate with over 300 chronically ill children and staff members. The post-ride event includes presentations, a camper show, and a gourmet barbecue for cyclists and their guests.

Bike4Chai is the highest per-capita fund raising cycling event in the United States. The ride has so far raised $5.5 million to support Camp Simcha and Chai Lifeline in 2015. This year’s top fund raiser raised over $500,000.

This is the sixth year of the event.

The 13 teams include groups of cyclists riding in honor or in memory of Camp Simcha campers and/or friends and loved ones with cancer and other illnesses, corporate teams, and community-wide teams.

There is a group of cyclists who will ride from Montreal, beginning on Sunday, August 1. They will cycle a total of 500 miles from Montreal to the beginning of Bike4Chai to the triumphant entrance into Camp Simcha.