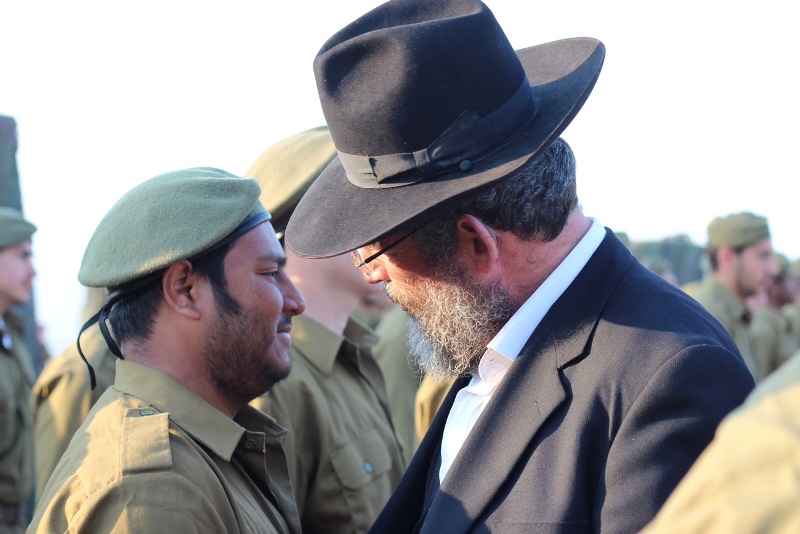 Defense Minister Moshe Ya’alon has once again emphasized that trying to compel chareidim to serve in the military is a dangerous policy that is likely to backfire. Ya’alon has been a longtime advocate of dialogue towards bringing more chareidim into the IDF or national service and he has always spoken out against efforts such as the ones seen in the previous government to compel chareidim to enter the military against their will. The passage of the new induction law compelling chareidim to serve seems to have backfired as Ya’alon feared for there are fewer chareidim stepping forward to serve as a result according to statistics released in recent months.

Kikar Shabbos News interviewed the senior minister in his office in an effort to understand the Ministry’s position vis-à-vis the drafting of chareidim into the IDF. The minister has not changed his position. He emphasized that a great deal has been accomplished in recent years through dialogue and mutual respect and he remains opposed to efforts to compel the chareidi community to serve in the military. He explains that he believes the eligible men should serve, but never must he never wanted to accomplish this by passing a law as was the case in the previous administration. “I saw this as being very dangerous” he explained.

“When I became involved in this political argument, primarily in the previous administration, my position was extremely clear. I was afraid the frenzy among politicians might lead to a process of withdrawing from entering the military. We achieved significant progress with a law compelling the situation. I was happy to learn that after the political crisis and the legislation, I was afraid of a decline. I saw the numbers which show a continued willingness of chareidi youths to enlist. I said if we can overcome this crisis I am optimistic regarding the future”.

Ya’alon was quick to add that this compels the system to continue efforts to bring chareidim onboard without compelling them. “From my perspective this is very important. I am absolutely optimistic for there is a process of integration which is for the good of the chareidi community, Israeli society and the State of Israel”.

Ya’alon explains the need to accommodate the chareidi lifestyle as a major step towards bringing the young members of the community into the military and he stresses he does not differentiate between combat service in Netzach Yehuda or in one of the non-combatant units, the technological units. He insists that continue dialogue along with accommodating the needs of the chareidi inductee will result in more young men coming onboard.

“It is no secret that there are those in the chareidi community who do not love the chareidi inductees to put it mildly and there are families who do not love it either. Unfortunately there are complicated incidents when a young man enlists against the will of his family and often the surrounding environment does not support him. Therefore it is of paramount importance to provide a family and social structure that accompanies the inductees in their service and as more people grow accustomed to seeing chareidim in the green uniform and green chareidi laundry hanging on the clothes line in chareidi neighborhoods the concept will become more understood but this is a process that takes time”.

Ya’alon spoke of the unfortunately events, when family remains strongly opposed and when there is violence directed at these soldiers, adding those who attack the soldiers are publically rebuked by rabbonim. He points out the need to lend support to the chareidi inductees who face many difficulties, looking back at the process over the past two decades and the progress that has been made.

“One of the most touching events for me is seeing one who represents the chareidi community lighting a torch on Independence Day…when you see the mobilization of the young chareidim it signals the integration and the figures speak for themselves. This is true regarding academic certification for chareidi as well as their integration into the workplace, for men and women, this is a welcome trend”.

“I am acquainted with Nachal Chareidi from its first days when I was serving as Central District Commander. I was there to receive the first company of Netzach Yehuda combatants which began serving in the Jordan Valley district – the first 96 chareidi combatants. It was history in the making and since then, thousands have enlisted”. He pointed out that today there is already a Netzach Yehuda reserve duty battalion.

Ya’alon feels that not every chareidi male wishes to continue in yeshiva and he feels the IDF can attract those seeking an alternative, those who do not view continuing limud as their first objective. “The IDF service is not intended to change the character of the chareidi inductees as the situation permits upholding the level of kashrus and lifestyle he is accustomed to in addition to providing an element of satisfaction knowing one is participating in the defense of the nation, giving of himself and amassing personal experience which leads to increased self-confidence”.

“Towards the end of his service if the young man does not have an occupation, his service permits him to acquire one and at the completion of his service he can enter the workplace with a profession. The chareidi young are quite talented”.