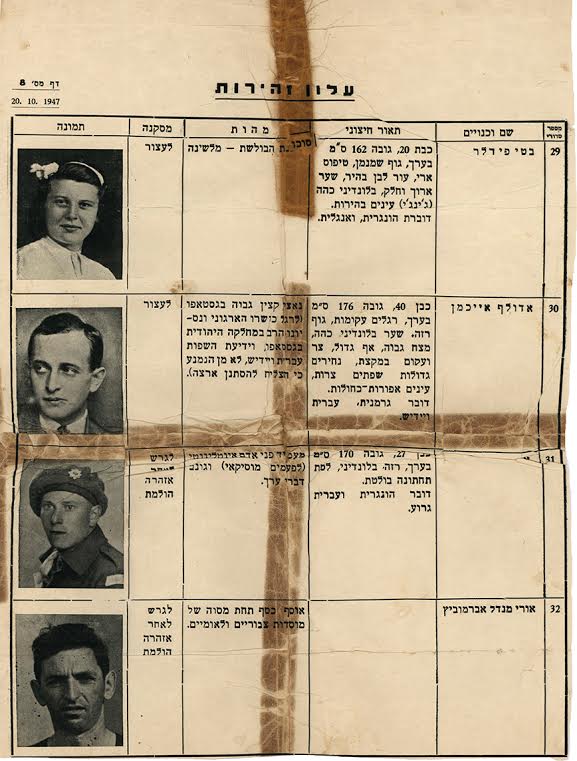 Secret lists of criminals and suspects (“Alon Zehirut”- Cautious Leaflet) from 1947 on behalf of “Shay” (“Sherut Yediot”), the intelligence arm of the “Haganah, were recently exposed. Among the names on the lists, Adolf Eichmann’s (1906-1962) name was found, revealing that the “Shay” feared he will infiltrate to Israel once the Nazi regime was subdued, disguising himself as a Jew. This booklet proves Eichmann had a high profile in Israeli mind already then, 15 years before he was kidnapped to Israel by the “Mossad”, which evolved from the “Shay”, and then brought to a highly covered emotional trial and eventually executed. The secret lists will be up for sale at the “Kedem” auction House in Jerusalem.

The list contains names and photographs of suspects who need to be arrested, deported or deported after investigation or warning. At the seventh and last sheet, appears Eichmann, with a clear order to arrest him. Despite the attached picture, a thorough description was given of him, based on the supposition he will try to disguise himself on this attempt to infiltrate the country: “40 years old, 176 centimeters tall, distorted legs, slim body, dark blonde hair, long forehead, big, narrow and slightly twisted nose, large nostrils, thin lips, grey-bluish eyes…”. The core of the fear was that Eichmann fled from his persecutors by camouflaging himself and coming to Israel as a Jew, “due to his organizational capacities and rich experience in the Jewish Department of the Gestapo, and having the knowledge of Hebrew and Yiddish languages, it is possible that he succeeded I infiltrating into the country”.

The fear of the “Shay” was not entirely unfounded; already in October 1937, ten years earlier, Eichmann, an expert in Jewish matters in the Nazi S.D. visited Eretz Israel together with his commander, Robert Hagen. The two made use of a cover story, as Eichmann identified as a journalist from the “Berliner Tagblatt” and his commander disguised as a student. They were both expelled the day after, after spending a night in Haifa; They did not receive stay permits from the British authorities, who probably knew of the real role of the journalist and student.

Nonetheless, this period of time helped them to examine the option of the immigration of German Jews to Eretz Israel to liquidate the “Jewish problem” and to expel the Jews from Germany. Simultaneously the members of the Nazi party and S.S. made positive connections with the Zionist organizations and even encouraged Zionist activity within the Jewish community. Even before Eichmann’s visit to Eretz Yisrael, he met with a “Haganah” member in Berlin, and was informed of the “Haganah” willingness to act for the German intelligence in Eretz Israel in order to promote the aliyah of German Jews. After the above-mentioned deportation of Eichmann, he met again with the same “Haganah” member –this time in Egypt- in order to promote the aliyah of Jews to Israel. After this meeting, he concluded that no mass aliyah to Eretz Israel should be encouraged, because the establishment of a Jewish State is not desirable for the Third Reich or for the British Empire.

In 1938 Eichmann was promoted, and was made in charge of coerced emigration of Jews out of Germany. As part of his new position, Eichmann tried to learn Hebrew on its own, and was able to understand and read Yiddish newspapers quite well.

Upon the end of World War II, Eichmann was incarcerated in Germany by the Allies army under the alias name of “Otto Ackman”, but he managed to flee the detention camp. As he was hiding in Germany under another alias for a few years, the “Shay” feared he might have infiltrated to Eretz Israel due to his elaborate acquaintance with the Jewish people. His elusive character and use of numerous aliases garnered that fear. Only in 1957 (!) the first clue of “Ricardo Clement”‘s whereabouts reached the spymaster Isser Harel, first “Shin Bet” director. Isser had been looking for Eichmann from 1944 when he joined the “Shay” headquarters. That circle was closed of course only when he was apprehended finally in 1960.

Meron Eren, owner of the “Kedem” auction house, adds that “this new document reveals the ‘Shay’s and to a further extent the Yishuv’s fear of the Nazi influence even after the war. The document also attests to the developed skills of the security bodies of the soon-to-be-state, who did not rely on the British intelligence, but still managed to cope with Eichmann’s genial ability to disguise himself throughout the years. This document is the earliest known artifact of the emotional and substantial connection Israel and Israelis have with Eichmann”.