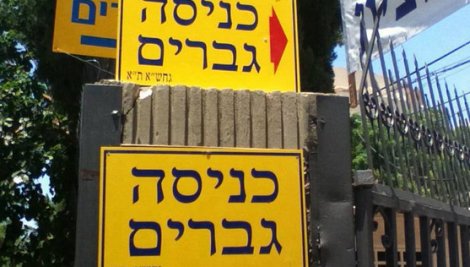 The mora d’asra of Kfar Chabad, Rabbi Meir Ashkenazi Shlita, has hired a public relations firm to assist him in spreading his tznius campaign among residents.

The rav, who succeeded his father ZT”L a number of months ago as rav of the Chabad community, is working hard to succeed in an area in which his father was not totally successful. A ‘letter from the rav’ was sent to all residents of the community spelling out modesty regulations for all.

The rav explains as we are in the shadow of Rosh Hashanah and the beginning of a new school year, it is important for all to familiarize themselves with the community’s regulations in addition to each and every person’s personal responsibility to adhere to these halachos.

While in recent weeks and months the rav’s efforts directed at the women of the community were evident to all, the letter appears to the children too. The pamphlet explains one’s skirt must cover one’s knees while one is seated, one must wear socks that cover the knee, one’s neck and elbows are to be covered properly, one’s general appearance should express humbleness and humility, married woman must wear a sheitel outdoors in the community and one may not make do with a scarf when walking in the street or while driving a vehicle.

“I am asking each and every person to make sure their daughters dress in accordance with these rules” writes the rav, who asks to not just make concern oneself with modesty but also with the internet, adding “Care must be taken to prevent access to websites that are inappropriate. These sites R”L have toppled many”.