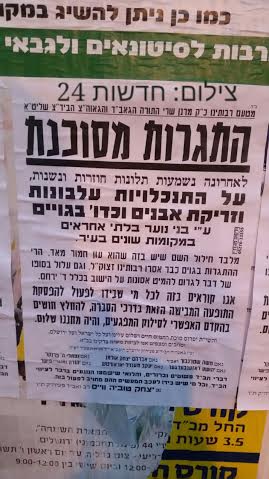 Pashkavilim are seen on Hoshana Raba morning condemning random acts of violence and destruction of property in response to the recent wave of Arab terror attacks. The pashkavilim are in the name of the rabbonim shlita of the beis din of the Eida Chareidis.

The pashkavil explains such acts result in a chilul Hashem in addition to be a seriously act which is prohibited. It adds these actions may also bring more tragedy to the tzibur.

The rabbonim call upon those with the ability to bring an end to these actions by youths to do so.

Some opine the sharp increase in Arab attacks against Jews is due to increased efforts among some members of Am Yisrael to establish a presence on Har Habayis. HaGaon HaRav Avigdor Nebenzahl recently warned that these ongoing efforts will bring a ‘kitrug on Am Yisrael, adding “All gedolei yisrael have signed against going to Har Habayis”.

It is pointed out that leading dati leumi community posek HaRav Dov Lior advocates visiting Har Habayis in compliance with halachic requirements and restrictions. It is added that Gedolei Yisrael throughout the generations have ruled one may not visit Har Habayis. This is the ruling of Gedolei Yisrael today as well, in addition to being the position of the Chief Rabbinate of Israel.