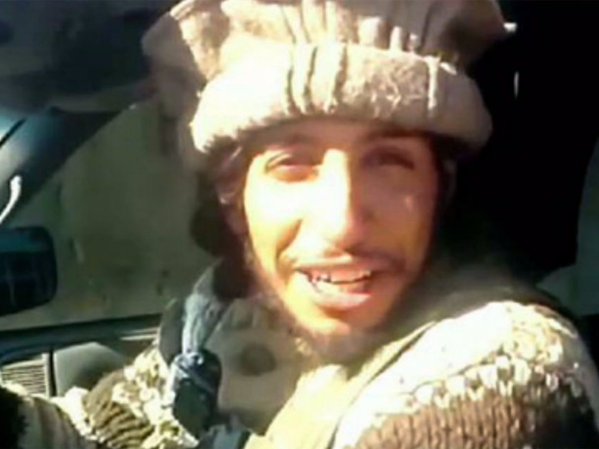 The presumed mastermind of last week’s devastating attacks in Paris once bragged about being so slippery he could move undetected between Syria and Belgium, his home country. On Wednesday he was targeted in a police operation in Paris.

Explosions and gunfire rang out as French police stormed a building in the Paris suburb of Saint-Denis where Abdelhamid Abaaoud was believed to be hiding, a senior police official told The Associated Press. Authorities said a woman blew herself up and a man was killed. Seven people were arrested. Police did not identify them.

The official was not authorized to be publicly named according to police rules, but is informed about the operation.

On Monday, French authorities identified Abaaoud, the child of Moroccan immigrants who grew up in the Belgian capital’s multiethnic Molenbeek neighborhood, as the presumed mastermind of last Friday’s attacks that killed 129 people and wounded over 350. He also is believed to have links to earlier attacks that were thwarted: one against a Paris-bound high-speed train that was foiled by three young Americans in August, and the other against a church in the French capital’s suburbs.

Once a happy-go-lucky student at one of Brussels’ most prestigious high schools, Saint-Pierre d’Uccle, Abaaoud morphed into Belgium’s most notorious jihadi, a zealot so devoted to holy war that he recruited his 13-year-old brother to join him in Syria.

“All my life, I have seen the blood of Muslims flow,” Abaaoud said in a video made public in 2014. “I pray that Allah will break the backs of those who oppose him, his soldiers and his admirers, and that he will exterminate them.”

Belgian authorities suspect him of also helping organize and finance a terror cell in the eastern city of Verviers that was broken up in an armed police raid on Jan. 15, in which two of his presumed accomplices were killed.

The following month, Abaaoud was quoted by the Islamic State group’s English-language magazine, Dabiq, as saying that he had secretly returned to Belgium to lead the terror cell and then escaped to Syria in the aftermath of the raid, despite having his picture broadcast across the news.

“I was even stopped by an officer who contemplated me so as to compare me to the picture, but he let me go, as he did not see the resemblance!” Abaaoud boasted.

The hardscrabble area in western Brussels where he grew up has long been considered a focal point of Islamic radicalism and the recruitment of foreign fighters to go to Iraq and Syria.

Abaaoud’s image became grimmer after independent journalists Etienne Huver and Guillaume Lhotellier, visiting the Turkish-Syrian frontier, obtained photos and video last year of his exploits across Syria. The material included footage of him and his friends loading a pickup truck and a makeshift trailer with a mound of bloodied corpses.

Before driving off, a grinning Abaaoud tells the camera: “Before we towed jet skis, motorcycles, quad bikes, big trailers filled with gifts for vacation in Morocco. Now, thank God, following God’s path, we’re towing apostates, infidels who are fighting us.”

Huver told the AP on Monday the video was too fragmentary to say much about Abaaoud’s character, but he still detected some signs the Belgian was moving into a leadership role.

“On the one hand I’m surprised,” Huver said of Abaaoud’s prominence. “On the other hand, I saw that there were beginnings of something . You can see that he’s giving orders. You can feel a charismatic guy who’s going up in the world … You can see a combatant who’s ready to climb the ranks.”

French authorities didn’t disclose the nature of the Belgian jihadi’s purported connection to a pair of foiled terrorism incidents earlier this year in France.

On Aug. 21, a heavily-armed passenger who boarded an Amsterdam-to-Paris Thalys high-speed train at Brussels opened fire in a train car before being overpowered by three Americans, two of them off-duty U.S. armed forces members.

French media reported the gunman in the abortive attack, Ayoub El Khazzani, 25, from Morocco, may have had ties to groups being investigated by counter-terrorism officials in Belgium.

Belgian authorities launched an investigation into his possible accomplices. El Khazzani has been jailed in France on charges including attempted murder in connection with terrorism and participation in a terror conspiracy.

On April 19, French authorities said they thwarted a plot to attack a church in the Paris suburb of Villejuif after the alleged perpetrator apparently shot himself in the leg and called police. Arriving officers traced the blood to the car of Sid Ahmed Ghlam, in which they found an arsenal of weapons and indications he was planning to storm a church later in the day.

French authorities have said the plot was masterminded from Syria.