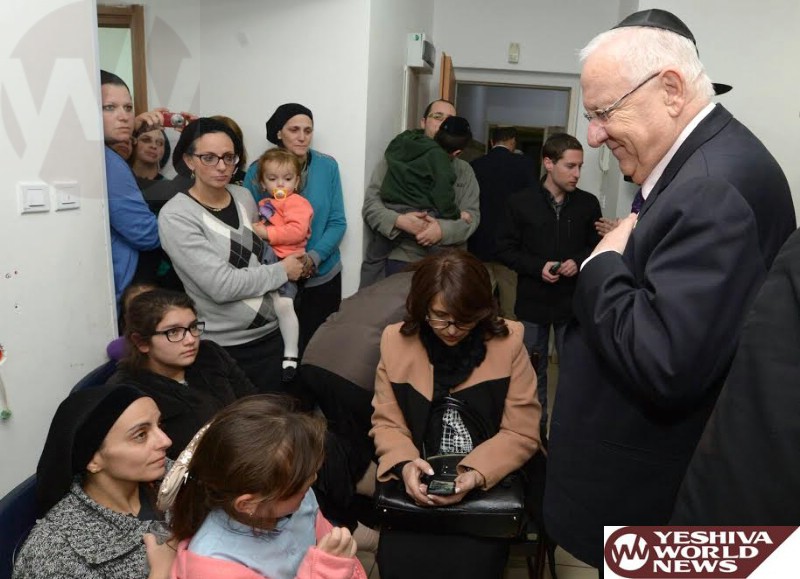 President Reuven Rivlin on Sunday evening 15 Teves made a shiva visit to the family of Rabbi Reuven Biermacher, who was murdered in a terrorist knife attack in Jerusalem at Shar Yaffo last week.

Rabbi Biermacher’s wife Naomi, and their children spoke with President Rivlin and told him how Rabbi Biermacher had felt it a great privilege to live in Israel, despite the difficulties after the family made Aliyah from Argentina.

Mrs. Biermacher explained to the President that last week they had returned from a family visit to Argentina during Chanukah. She said, “People ask me if I wanted to go back to Argentina and I say ‘no’, my husband Reuven would not want that. The spirit that is here in Israel exists nowhere else. This is our home, despite the difficulties.”

Rabbi Biermacher’s son, Boris, told the President of his father’s support even during times of difficulty, and said, “My father always told us not to give up, even when things are tough, we must continue. This is what we learned from him, and that is what we will do.”

President Rivlin told the bereaved family that he was very moved by their words about their father, who he noted was a remarkable man. He spoke with the family and said that Israel was enduring difficult days, but stressed he had no doubt the country would overcome them. He added that he drew great inspiration from the bereaved families.

The President said, “The personal pain and sorrow is great, and I pray – together with you – that happier times will soon return.”

Rabbi Biermacher taught at Yeshivat Eish Torah in the Jewish Quarter of the Old City. He had just passed through Shar Yaffo on his way home when he was attacked by two terrorists, suffering multiple stab wounds to the upper torso. He was evacuated to the Hadassah Ein Kerem hospital where he later succumbed to his injuries.

Born into a secular Jewish family in Argentina, he became frum in his youth and five years ago immigrated to Israel with his family. Described as “a man full of joy and life,” he joined the Eish Torah Yeshiva two years ago, where he taught in the Spanish department to students from South America. He was the brother of well-known Argentine Jewish author Marcel Biermacher.

Rabbi Steve Berg, the Director General of Aish Hatorah, described Rabbi Biermacher as “a wonderful man and a beloved rabbi, who was loved by his students.” He added, “His students would come into our yeshiva not even knowing the Hebrew alphabet. He was very patient and worked with them to bring them up to speed.” Rabbi Biermacher served as a source of inspiration to them: “It is one thing to teach young men who come from a lifetime background of Jewish studies. It takes a special type of man to have the patience to work with students who come with no background.”

Rabbi Reuven Biermacher was buried in Har Menuchos in Yerushalayim. He is survived by his wife and seven children, aged 2 to 18.