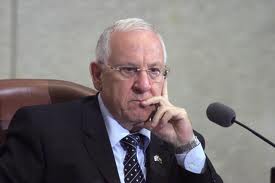 Ezra Schwartz, 18, from Sharon, MA., was spending a year in Israel having completed high school to volunteer and study in Yeshiva when he was shot and killed in a terror attack at Gush Etzion Junction south of Jerusalem on November 19. His family returned his body for burial in his home-town in the United States. President Rivlin welcomed Ezra’s parents and siblings who were visiting Israel to his residence, to attend a number of memorial events and dedications that were taking place in his memory.

The President noted that Ezra had been on his way from volunteering to deliver food to IDF soldiers when he was shot and killed in a terror attack next to a bus stop south of Jerusalem. President Rivlin said to Ezra’s parents and siblings, “Ezra was like a soldier, he was there to help look after the soldiers, and I have heard was one of the best volunteers. He is one of our sons, and we will always remember him.”

He added, “I and all the Israeli people are with you, and we hope and pray that you will only know happier times.”

Ezra’s father, Ari Schwartz, told the President of his son’s joy at being able to spend time in Israel. He said, “Ezra was happy to be here, he was excited about his year, and about being in Israel.”

The family went on to speak with the President about the wonderful kindness shown by many individuals and organizations since the attack, and of the memorial events and dedications to Ezra’s memory which were being held in Israel and the US.

Later in the day, President Rivlin paid a condolence visit to the family of Ofer Ben-Ari, who was killed in a terror attack near Shar Yaffo in Jerusalem on Wednesday, 24 December 2015.

The President said, “I want to tell you how much I appreciate all that I have heard about Ofer. He did not hesitate for a moment in coming to help, he did not stand by when others were being attacked. Ofer showed tremendous bravery. The strength of the whole people is drawn from special people such as Ofer, and of course from his dear family.”

Ofer’s wife, Yifat, thanked the President for his visit and his warm words and said, “Ofer was the epitome of ‘Love thy neighbor’. He acted in the most noble, wise, and sensible way in an impossible situation. We are a family of faith, we know that what happened there was complicated and not simply a matter of instinct. We had the merit of a life with him, and we will cherish his memory and his legacy. Our resilience knows no bounds. Even when terror attacks took place, my husband would not allow us to be frightened, and would say we must carry on, heads held high, without fear in the streets of Jerusalem. Our nation is measured as one – we do not break, no matter what. During the Shiva we have received so much warmth and support from those around us – friends and strangers alike.”

The President noted the family’s exceptional strength of spirit and said, “Our strength is in our unity, when we are united, nothing can overcome us. Ofer’s actions will go down in the chronicles of the State of Israel – people such as he are the strength of our country.”