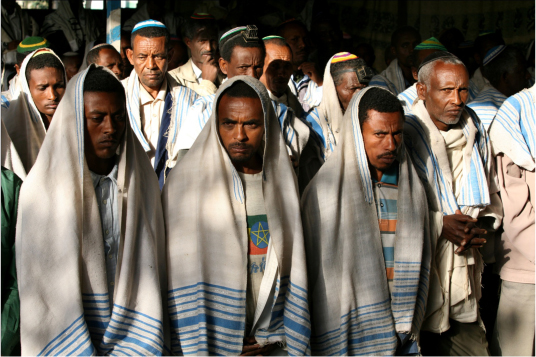 Likud MKs David Amsalem and Avraham Neguise have worked hard to push the cabinet to approve the aliyah of 1,300 members of the Falash Mura community that remains in Ethiopia. The cabinet recently voted to approve bringing 500 additional Falash Mura but Amsalem and Neguise refused to accept this. They began boycotting votes, making it difficult for the coalition to pass bills. The two faced sanctions but remained adamant until the cabinet changed the number to 1,300 Falash Mura expected to arrive in 2016 and received a commitment the matter will be discussed during the 2017-2018 budgetary talks.

A number of things have been learned since. For one thing. Walla News reports it received a tape recording that documents the MKs’ plan. They hope to get many members of the Ethiopian community to join Likud because of their efforts on behalf of the Falash Mura and this will put them in a position to demand becoming Interior Minister (Amsellem) and Absorption Minister (Neguise). So it appears they motives are far from pristine and not necessarily the good of the Ethiopian community.

In fact, according to veteran members of the Ethiopian community, those who walked to Israel via Sudan decades ago and their offspring insist the new Falash Mora aliyah that is planned and aliyah of recent years are a scam. They insist the Falash Mura that were serious Jews and compelled to convert have long ago been reunited and these are people who are not only Christians, but missionaries. The reportedly maintain an affiliated with the missionary organization “The Church Ministry Among the Jews”, Walla News adds.

Israel Radio journalist Tsega Mekalu, who describes himself as traditional and not religious, is outraged and wants to prevent the aliyah of additional Falash Mura explaining “they are destroying our community from within”. Many members of the community who are dati leumi or self-proclaimed traditional, want to maintain the Jewish integrity o the community and remain adamantly opposed to the aliyah of additional Falash Mura.

Veteran Ethiopians living in Israel for decades and their families explain:

· If these Falash Mura are legitimate as they claim, why weren’t they and their families with us to walk through Sudan and Addis?

· It is all about money. They are funded by the New Israel Fund, who is happy to bring more missionaries to Israel.

· PM Netanyahu and Likud simply don’t care. They too are pleased.

· The New Israel Fund is involved and the goal, to destroy Yiddishkheit. For years we maintained our Jewishness with mesirus nefesh only to be destroyed in the State of Israel.

· It stinks! It’s all about money. Our children see they live here, speak Hebrew and serve in the army and then marry them. They are goyim and we want no part of them!! Why are they being paid to come on aliyah. The minute they convert they revert back to being active Christians. Speak to any Jewish Agency officials in absorption centers. They can tell you the churches in these centers are active. These people do not want o be Jewish but they want to make us Christians.

According to the Walla News report and other sources gathered by YWN-ISRAEL, there is mounting opposition to the aliyah of additional Falash Mura among veteran Ethiopians, those who emigrated from Ethiopia in the late 1970 and early 1980s.