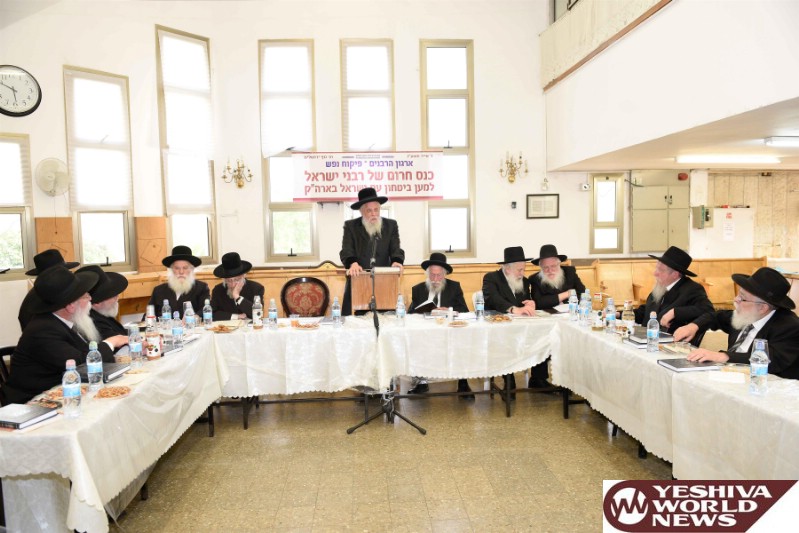 Over 40 leading members of the Rabbinical Congress for Peace (RCP) convened at an emergency conference in Jerusalem Sunday 7 Iyar to deliberate the incessant terror wave in Israel and in order to protest the intention to renew negotiations with the Palestinians. The event was hosted in the Givat Pinchas Beis Medrash of the Bostoner Rebbe of Jerusalem Shlita.

The Chairman of the conference Rabbi Avrohom Shreiber who served as the Rabbi of Kfar Darom and personally lived through the expulsion from his house in Gush Katif. The conference was opened with the recitation of Tehillim by Rabbi Ovadia Yosef, son of Rabbi Yaakov Yosef ZT”L who was leading member of the RCP.

He was followed by a member of the Supreme Rabbinical Court in Jerusalem Rabbi Zalman Nechemia Goldberg, a contemporary leading Halachic authority. He warned against further withdrawals, “we’ve seen what happened in Gaza and we dare not repeat the same mistake again,” he said.

Rabbi Zev Dov Slonim, a rabbi in central Jerusalem said “today there is no need for explanations everyone sees what kind of instability and terror withdrawals bring. This is precisely what the Jewish Code of Law warned against in the laws of Shabbos, Perek 329.

Rabbi Yirmiyahu Cohen, a leading rabbinical figure in Paris said that the dangerous situation in which Israel finds itself in recent years as a result of withdrawals can be classified as living “in a time of war.” In a time of war, he said, killing the enemy and terrorist takes precedence over ethics.

“We must protest against the continuous warped verdicts issued by the Bagatz (High Court of Justice) which cannot differentiate between a Jewish soldier who protects his nation and country and an enemy, a terrorist who wants to kill you. We must bring to public attention what the Torah has to say about this. The Torah is the absolute truth and most ethical code of laws which leads to a true peace,” said Rabbi Cohen.

Rabbi Yitzchak Y. Yeruslowsi, the head of the Chabad Rabbinical Court and Rabbi of Nachlas Har Chabad in Kiryat Malachi spoke in great pain about the lack of security in Israel. “Nowadays no one is safe anywhere here and it is forbidden to acquiesce to such a situation. I am convinced that if the current policies of the government would change we would see an improvement in the situation,” he said.

Rabbi Issar Klonsky, Chief Rabbi of Givat Mordechai in Jerusalem spoke of what he called the “hypocrisy of the media and courts of justice in Israel.”

“Are you really concerned about protecting human rights and not to harm innocent civilians? It is precisely your actions and verdicts that have caused bloodshed of innocent men, women and children! It’s hypocrisy and cruelty! Is there anything more ethical and merciful than our Torah? And if our Torah determines that if one comes to kill you that you should kill him first, it is because this is the true way to protect human rights and the lives of innocent civilians. We have to be concerned about our rights and lives and not the lives and rights of the enemy.” Rabbi Klonsky said.

He was followed by the Bostoner Rebbe of Jerusalem Rabbi Meir Horowitz Shlita, who hosted the conference and praised the unity displayed by the various rabbis from different circles who came to protest the breach in the integrity of the Land of Israel.

He said that Jerusalem as well as all cities in Israel today have the halachic classification of border towns where one is obligated to kill a terrorist even on Shabbat.

Rabbi Joseph Gerlitzky, Rabbi of Central Tel Aviv and Chairman of the RCP said that “as long as the government will not stop the withdrawals and express regret over its weakness and over all the withdrawals as a result of Oslo and the disengagement, it will never be able wipe out the terror waves.

“The motivation that every Arab terrorist has to kill Jews is a result of the government’s policies in the past 25 years. The terrorist sees that every time he kills someone and then make demands, Israel concedes and submits. Or the foolish statements made by senior security officials that condemn soldiers for killing terrorists, all this propels the enemy to spill more Jewish blood.”

Rabbi Avrohom S. Lewin, Executive Director of the RCP voiced concern over the possibility of the Labor Party joining the government whose sole purpose is to accelerate negotiations with the enemy on further withdrawals.

He reiterated what the Lubavitcher Rebbe told Rabbi Simcha Elberg, the chairman of the Union of Orthodox Rabbis of USA and Canada in 1978 a few weeks after the Peace Now movement was founded. The Rebbe told Rabbi Elberg:

“With regard to Jews who go ahead and found a movement whose entire goal is the surrender of the territories, it is said, “Those who ruin and destroy you will emerge from your own ranks.” They are much worse than the Meraglim. Those spies did whatever they did only among the Children of Israel, in order to weaken them. They wanted only that they should remain in the wilderness. This new movement, by contrast, will also operate among the nations of the world, explaining that the Jews ought to surrender the Holy Land. Its spokesmen will speak to the detriment of the Holy Land both at home and abroad. They are thus extremely dangerous, and the Union of Orthodox Rabbis should counter that by an “information campaign” that will rouse every influential individual to take energetic action.

“If action is not taken in time, this movement will cause Israel woeful and unprecedented misfortunes. All the relevant rabbis and communal organizations should recognize how great is their responsibility. For if this movement is not confronted by an information battle, it will soon prove to be a root whose fruit is bitter venom, and all the sages of the Jewish people will never be able to undo its far-reaching damage.”

Rabbi Lewin concluded: “unfortunately this prediction materialized right before our very eyes. The Labor Party is Peace Now and therefore everything must be done to prevent it from being part of the present government which is very weak on its own.”

Tzfat Chief Rabbi Shmuel Eliyahu Shlita called on the defense minister and the COS as well as other senior security officials to instruct soldiers not to hesitate in shooting and killing a terrorist. Quoting the Biblical verse “he who is fearful and fainthearted, let him return to his home,” Rabbi Eliyahu said “if you can’t stand the heat then resign.”