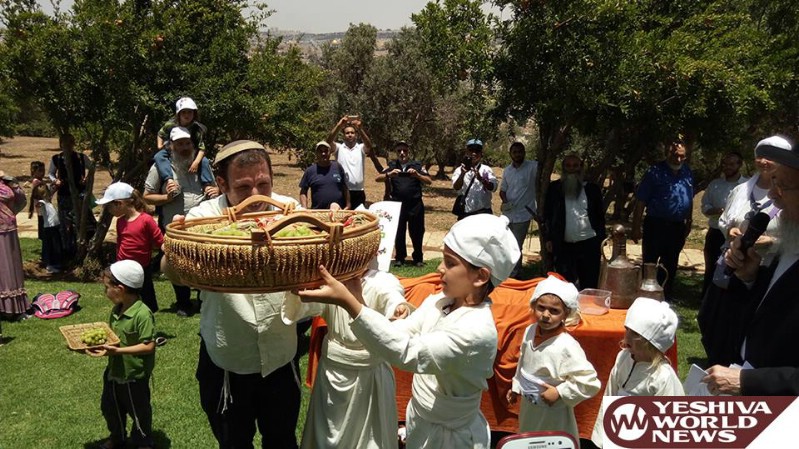 The children, dressed in specially made priestly garments, enthusiastically practiced the Bikurim ritual, which is central to the Shavuos service. Afterwards, adult Kohanim from the Temple Institute’s Netzer HaKodesh School for Kohanim, demonstrated the full Shavuos service including the First Fruits and Twin Loaves offering.

It is a positive commandment to bring an offering of the first fruits of one’s field, specifically, from the seven species of the Land of Israel, and to present them to a priest in the Beis Hamikdash, as the Torah states “You shall bring your first fruits to the House of the Lord your G-d… ” (Ex. 23:19)

The first fruit offerings are brought in large woven baskets and the offerings are waved before the altar, extending the basket in four directions: outwards, drawing it back towards oneself, raising it and lowering it. This is done while both the pilgrim and the kohen hold the basket.

Like all offerings made in the Beis Hamikdash, the first fruit offering is accompanied by the blasting of silver trumpets by the Levi’im. The pilgrim’s declaration of gratitude to G-d and the presenting to G-d of the first fruits of our labors is naturally accompanied by festive song and dance.

In addition to the first fruit offering of the seven species, another offering was brought to the Beis Hamikdash on Shavuos from the first of the harvest: The “twin loaves,” two loaves of wheat bread baked from newly harvested wheat. This special offering, the only leaven ever brought to the Temple, was also “waved” before the presence of G-d and thus elevated… and these breads represented the blessing of G-d’s influence and blessing on man’s earthly, physical needs throughout the year. These two breads were waved on the eastern side of the altar by a kohen, together with an offering of two sheep for the festival.

The event was part of the Temple Institute’s ongoing efforts to prepare for the Third Beis Hamikdash. Having already researched all relevant Halachic information and recreated over 60 sacred vessels for use in the Beis Hamikdash, the Institute is now focusing on training Kohanim in rituals that have not be practiced for over 2,000 years.

Rabbi Chaim Richman, International Director of the Temple Institute commented: “The world has never been so ready for the rebuilding of the Third Beis Hamikdash in Jerusalem. Today’s event was yet another sign of the spiritual awakening that is growing stronger every day in the Land of Israel and around the world, as more and more people, young and old, are joining the effort to rekindle the flame of the Holy Temple and make concrete steps toward the rebuilding of the Holy Temple in our day. Having recreated over 60 sacred vessels and published dozens of books on the topic, the Temple Institute is now proud to be training a new generation of Kohanim in the ways of their ancestors.” 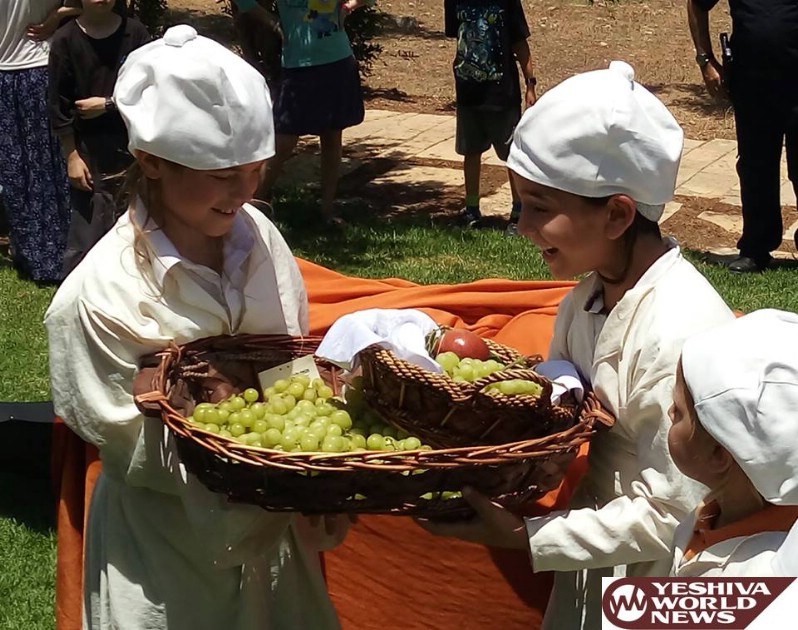