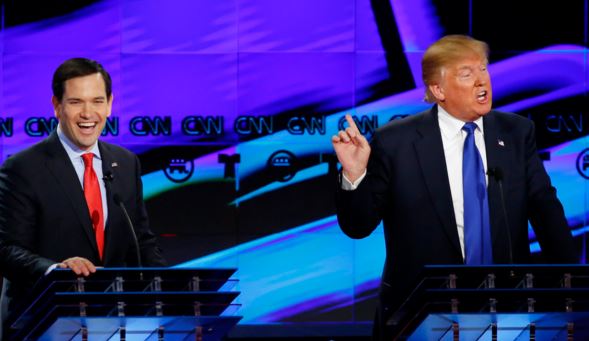 A dangerous, erratic, con man with the worst spray tan ever. That’s how Sen. Marco Rubio described Donald Trump when they were both seeking the Republican presidential nomination.

Now that Trump is the nominee and Rubio is running for re-election, his tone is different. He is no longer criticizing Trump, but he isn’t exactly gushing praise. Democrats are trying to make him look like a hypocrite for backing the man he previously said shouldn’t have access to nuclear weapon codes, and for jumping back into the Senate race after he said he wouldn’t.

But don’t ask Rubio to reconcile supporting Trump with his past criticism.

“We’ve gone through that a million times,” Rubio said at a campaign stop at a Tallahassee restaurant. “At this point we’re just going to continue to focus on my race and leave the past in the past.”

Last month in Panama City, Rubio said he is supporting Trump because he pledged early in the campaign to support the Republican nominee.

Leaving his remarks in the past isn’t something his opponents are willing to do. Republican developer Carlos Beruff often criticizes Rubio for not enthusiastically supporting Trump, and Murphy and Grayson are calling him out for his hypocrisy.

Grayson described the relationship between Trump and Rubio by quoting late New York Yankees manager Billy Martin, who once said of late team owner George Steinbrenner and star outfielder Reggie Jackson: “The two of them deserve each other. One’s a born liar and the other’s convicted.” (Steinbrenner had pleaded guilty to making illegal contributions to President Richard Nixon’s campaign.)

“That’s sort of how I feel about watching the love/hate fest between Marco Rubio and Donald Trump,” Grayson said .

Beruff, who has spent $8 million of his own money in the Republican primary, has repeatedly criticized Rubio for not doing more to support Trump.

“There are some people who don’t like the tepid response that Rubio has shown to Trump,” Beruff said. “There’s a loyalty there.”

Beruff’s effort doesn’t appear to be working: He’s far behind Rubio in the polls just a week away from the Aug. 30 primary.

Republicans say it’s a matter of forgiving and forgetting, despite Rubio making fun of Trump’s small hands, suggesting the billionaire wet his pants during a debate and mocking his Twitter misspellings at a campaign rally.

Wearing a “Make America Great Again” baseball cap to show support for Trump, Republican Bob Bezick, 64, of Madison said after attending Rubio’s Tallahassee event that he didn’t appreciate the back and forth between Rubio and Trump. But it won’t stop him from backing Rubio.

“It’s policies more than any of the chatter. All that stuff is just noise,” Bezick said.

And despite the not-so-cozy relationship between Rubio and Trump, Republicans say they won’t vote for Murphy or Grayson.

“That would be an extreme example of cutting off your nose to spite your face,” said Orange County Republican Party Chairman Lew Oliver .

If anything, Oliver said, keeping his distance from Trump could help Rubio with independent voters or Democrats dissatisfied with their party’s nominee.

“Tactically, that’s not a bad maneuver from his perspective because he’s probably going to get the Republican votes regardless,” Oliver said .