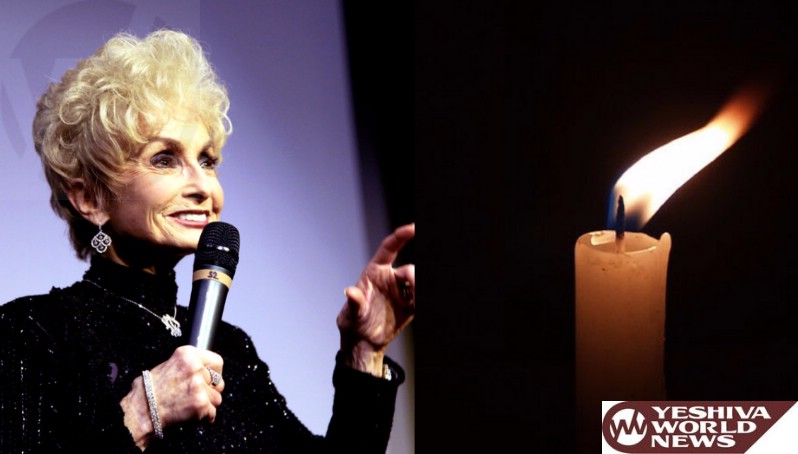 With deep pain and anguish we are saddened to report the petirah moments ago of Rebbetzin Esther Jungreis a”h founder of HINENI and pioneer in the world of Kiruv. With the Rebbetzin’s petirah K’lal Yisroel has suffered an irreplaceable loss.

The Rebbetzin was a trailblazer, for over a half century, crisscrossing the globe with her message of loving-kindness and hope. She was a teacher of Torah to millions of Jews from every walk of life.

She spent her life showing the beauty of Yiddishkeit to Jews across the globe bringing countless neshomos back to their roots.

Rebbetzin Jungreis was born in Szeged, Hungary in 1936, where her father HoRav Avrohom HaLevi Jungreis zt”l was Chief Rabbi.

A Holocaust survivor, Rebbetzin Jungreis made it her life mission to bring back Jews to authentic Yiddishkeit. She was a pioneer in the world of kiruv/outreach and founded the international HINENI Movement.

The Jungreis family had been deported with other Jews from Szeged. After suffering through many concentration camps, B’chasdei HaShem, the family eventually arrived in Switzerland.

In 1947, after being spared the horrors of the concentration camps and the Holocaust, the Jungreis family arrived in Brooklyn, New York where the Rebbetzin married a distant cousin, HoRav Meshulem HaLevi Jungreis zt”l. The newly-married Jungreis couple settled in North Woodmere, New York, where Rabbi Jungreis was the spiritual leader of Ohr HaTorah.

The Rebbetzin, together with her husband embarked on a lifelong mission devoting their lives to combatting the spiritual Holocaust that was occurring right in front of their eyes here in the United States. She waged a fierce battle against interfaith marriages, secularization, and other forms of assimilation, which she firmly believed was an existential threat to the continued existence of K’lal Yisroel.

Under the Rebbetzin’s leadership HINENI became a worldwide movement, inspiring Jews to seek out their roots and return to Yiddishkeit. Rebbetzin Jungreis authored several best-selling books including “The Jewish Soul On Fire”, “The Committed Life”, and “The Committed Marriage”, all of which have been translated in many languages with millions of volumes disseminated in every corner of the globe. Her latest book – “Life Is A Test” was widely acclaimed as one of the 10 best Jewish inspiration books of all time.

The Rebbetzin’s pioneering work has been widely recognized, and she received brochos and encouragement from numerous gedolim, including such giants as the Satmar Rebbe, HaRav Yoel Teitelbaum zt”l, HaRav Yosef Eliyahu Henkin zt”l, HaRav Moshe Feinstein zt”l, and many others.

She was also recognized by numerous world leaders for her work within the Jewish community to advance Yiddishkeit. Among them were such notables as the late Prime Minister of Israel Menachem Begin a”h and President George W. Bush who asked the Rebbetzin to accompany him to Yerushalayim for the celebration of the 60th Anniversary of the State of Israel in 2008.

The Rebbetzin was an incredible woman – a person who has literally influenced and touched countless people. The many thousands of individuals who were fortunate enough to receive her brocho immediately felt the connection with this unique person.

Rebbetzin Jungreis is survived by her children Chaya Sora Gertzulin, Rabbi Yisroel Jungreis, Slovi Wolff and Rabbi Osher Jungreis, and by many grandchildren and great grandchildren.

The Levaya will be held on Wednesday morning at 11:00AM at the Agudath Israel of Long Island, located at 1121 Sage Street in Far Rockaway, NY.