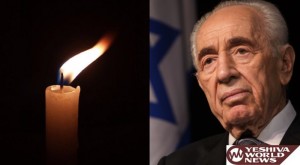 Heads of the Shin Bet, IDF, Israel Airports Authority, and the Prime Minister’s Office are all going to be meeting today, Wednesday, 25 Elul, as they must plan the security and related logistics of the levaya of the late president, Shimon Peres, which is set for Friday, 27 Elul at 11:00am in Jerusalem.

In fact, when Mr. Peres suffered the major stroke some two weeks ago, the heads of the various agencies began discussing the eventuality of his petira.

At Ben-Gurion International Airport, additional parking areas are being allocated as the security officials are aware that for Mr. Peres’ 90th birthday event, sixty planes arrived and a special runway was allocated for these flights. The levaya comes days before Rosh Hashanah, perhaps the busiest days of the year at the international airport. Some 90,000 plus people are expected to pass through the airport on Thursday, 26 Elul and the funeral just adds to this number.

The VIPs arriving for the funeral will also impact traffic on the Jerusalem-Tel Aviv Highway (Route 1) as well as traffic in areas of Jerusalem, with Thursday and Friday being major shopping days ahead of Shabbos and Rosh Hashanah 5777.

Mr. Peres’ coffin will lie in state in Knesset on Thursday and the funeral will be in Mt. Herzl Cemetery, in the section for national leaders.