Agudath Israel of America’s Torah Projects and Daf Yomi Commission hosted an inspiring and informative yom iyun to a rapt audience at Agudath Israel Bais Binyomin in Flatbush, with thousands more participating by phone or live-streaming.

EMUNAH: TWO SIDES OF A COIN

Rabbi Zwiebel in his introductory remarks noted the media spotlight on alleged wrongdoing in the frum community. He recalled the final message Rav Pam zt”l gave to Klal Yisroel on the topic of ehrlichkeit, in which the manhig hador expounded on the question that greets a person in beis din shel maalah when his earthly journey is over: “Nososa venosata b’emunah?” Rav Pam cited two dual meanings of the word “emunah;” integrity in business dealings and faith in Hakadosh Boruch Hu. A true baal emunah, he said, is by definition ehrlich; faith in Hashem’s mastery of the world makes him incapable of taking what doesn’t belong to him.

THE AVOS BUILT KLAL YISROEL INTO A NATION OF YESHORIM

The evening’s first speaker, the Novominsker Rebbe, pointed out that making a kiddush Hashem should not be a person’s driving force. One’s actions should rather be inspired by v’osisa hatov vehayoshor – wanting to do the right thing because it’s right.

He quoted the Netziv in his pesichah to Haamek Dovor who cites the
Gemorah in Avodah Zorah that Sefer Hayoshor mentioned in Novi is Sefer Beraishis, because the avos hakedoshim, besides being tzadikim and chasidim, were yeshorim.

“Sefer Bereishis shows how the avos built Klal Yisroel into a nation of yeshorim,” noted the Rebbe, quoting the Netziv. “We must make yashrus the cornerstone of our lives as well.”

He urged all listeners to take the purpose of the kinus to heart. “Leiv yodeiya moras nafsho, each one knows the pain of their own failings,” he said. “We are all trying to be ehrliche Yidden and hoping for siyata dishmaya. May Hashem be makabel our teshuva berachamim uveratzon.”

THE GRANDEUR OF AN ORDINARY STREET VENDOR

Rabbi Leiff took the theme of “a nation of yeshorim” further, citing instances in the Gemara that illustrate a remarkable level of yashrus. One incident involved Shimon ben Shetach who purchased a donkey from a non-Jew, discovering afterward it was carrying a diamond. When urged by his students to keep the diamond, he resolved to do just the opposite and return it. “My tachlis is not to become rich from someone else’s diamond,” he said. “My tachlis is that umos haolom should say Yidden are unbelievable.”

In another place the Gemara discusses whether charoses on Seder night is a separate mitzvah or merely a tavlin – a remedy to offset the bitterness of maror. The Gemara cites one opinion that charoses is a tavlin. But another tanah rejected this position, noting that Jewish street vendors would call out to people before Pesach, “Come buy charoses! It’s a mitzvah!” So upright and trustworthy were these “ordinary” street vendors that no one suspected them of “false advertising” to drum up business.

“Their sales pitch was considered so reliable it was used by one opinion as a rayah in deciding halacha l’mayseh,” marveled Rav Lieff. “These are our ancestors, this is the legacy they passed down. Honesty and integrity are part of our DNA; we are Shimon ben Shetach Yidden…”

“What is the avodah of the Yomim Noraim?” he asked. “The Gemorah in Yuma says the avodah is to refrain from chilul Hashem. Do nothing that would make your fellow Jews embarrassed to be a frum Jew… Rambam in Yesodei HaTorah goes further. He describes what goes into making a kiddush sheim shomayim. Keep your word. Pay immediately. Greet everyone in a cordial manner…”

Rav Ari Marburger commented that yashrus in human interactions is not always a simple matter. People feel they can rely on common sense to be an ish yoshor, he said. But the issue of genevas daas, misleading others, pervades many social and business situations in ways people don’t even realize. “A person needs to learn the sugyos to get a full grasp of this prohibition,” he said.

He discussed the issur of hachzokas tova b’chinom, misrepresenting oneself so that someone thinks you did them a favor when you didn’t. Instilling in someone an unfounded sense of gratitude is a form of geneivas daas even when no words are exchanged and not a single penny changes hands.

He cited the Gemara’s discussion of whether one can send his non-Jewish friend a piece of non-kosher meat. If the meat contains the gid hanosheh, he may do so. But if the gid hanosheh has been removed, making it appear to be kosher meat, a Jew is forbidden to send it to a non-Jew as the recipient will assume the gift is more valuable than it is. That, says the Gemora, is a form of geneivas daas.

Modern-day variations of geneivas daas abound, said Rav Marburger. A
baal simcha refills a bottle of expensive liquor with a cheaper brand, impressing guests with his largesse as he offers one and all a generous toast. Or a person sells someone a car without informing the buyer that the air conditioner is broken. Inasmuch as it’s winter, it doesn’t occur to the buyer to check it out.

In halacha, the rule of thumb, said Rav Marburger, is not “Buyer, beware!” as it is in our culture; it is rather, “Seller, beware! Negius can lead to geneivas daas.”

LIVE A BROADER LIFE, NOT A DOUBLE LIFE

The last speaker, Mr. Avi Schick, startled listeners with his introduction: “I’m a partner in a large law firm that assists people who are under criminal investigation for white collar crime…Seven years ago I didn’t have a single frum client. Today a large part of my practice consists of frum Yidden. What’s responsible for this tragic situation?”

He discussed what he sees as the practice among many frum businessmen of living life on a dual track, “where Torah and mitzvos govern one’s behavior at home whereas in business, the arbiter of right and wrong is whatever you can get away with.”

He described a scenario in his office in which a non-Jewish secretary, trained not to extend her hand in greeting to a religious male client and to order food for them only from certain restaurants, marveled at a religion that has so many restrictions, but seemingly no rules about the conduct that brought these clients here in the first place!

Mr. Schick recounted another incident where “a colleague in the firm turned to my client who was under criminal investigation, commenting, ‘You know, I often hear you say, ‘G-d runs the world…G-d will take care of things.’ But if He really runs the world, why do you think you need to help Him out by taking money that’s not yours?'”

“My client was mortified. I, too, was embarrassed…” recalled the speaker. “Living a double life where we’re careful about kashrus but cavalier about yashrus should be as incomprehensible to us as it is to outsiders.”

He cited the advice Rav Hutner, zt”l, gave to a student who felt he was drifting spiritually to strengthen the connection between his job and his inner identity as a ben Torah. “Don’t live a double life but a broader, more unified, authentic life. Import the kedusha of your learning and tefilla to the workplace,” the rosh yeshiva urged. “Consciously infuse your ‘commercial’ life with yeshiva values and sensitivities.” 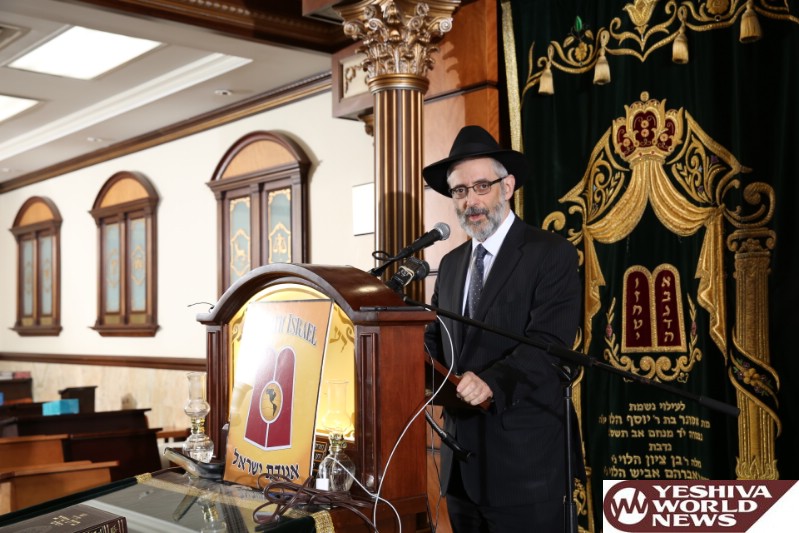