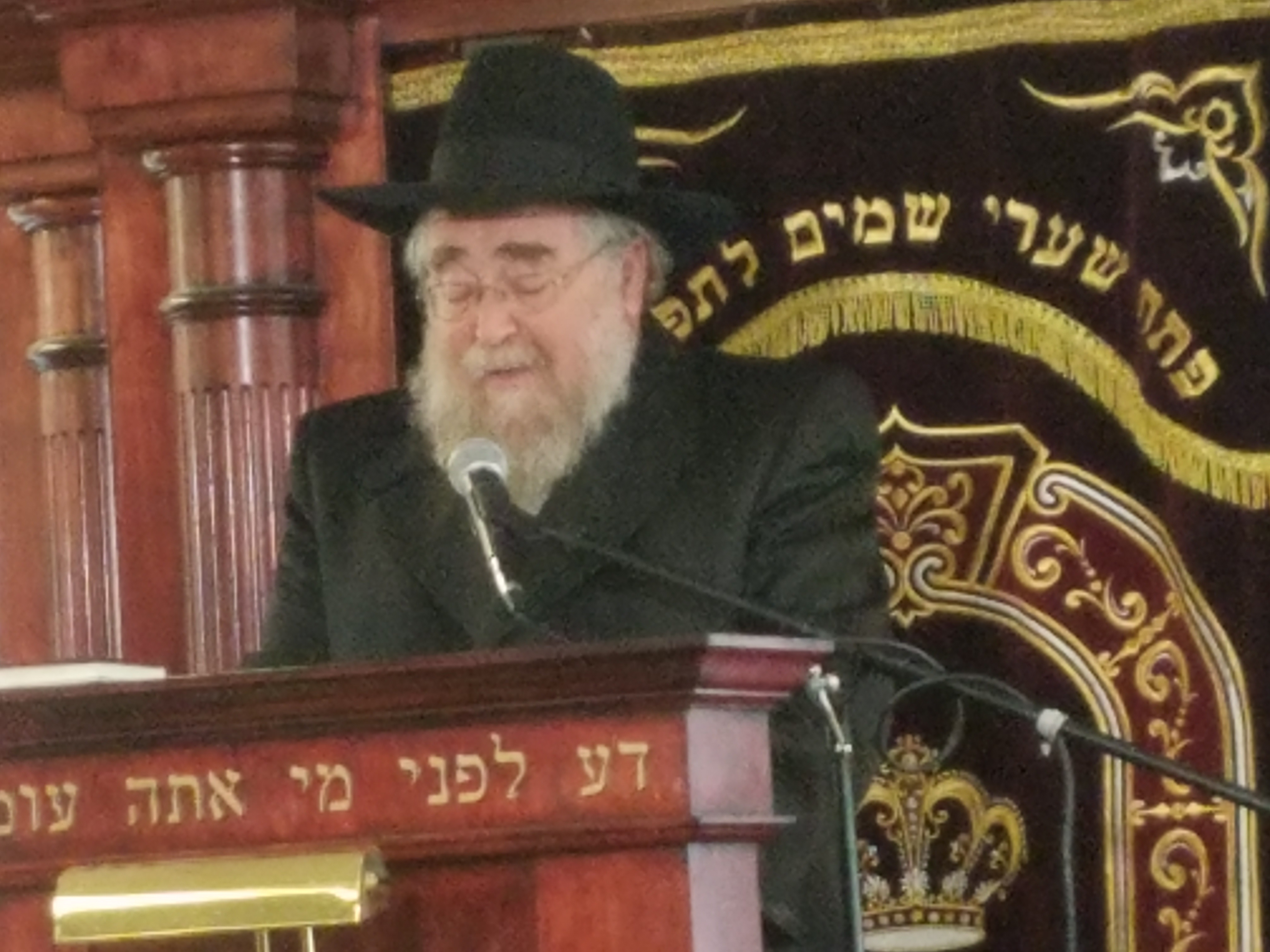 Rebbitzen Gita Cohen A”H was the great-granddaughter of the Alter of Slabodka. Her grandfather was the famed Tzaddik of yerushalayim, Reb Aryeh Levine zt”l. She was the niece of Rav Elyashiv zt”l and lehavdil ben chaim l’chaim – the cousin of Rav Chaim Kanievsky Shlita, and the daughter of Rav Laizer Pletchinsky t”l, one of the gedolei haDor. In her own right, she was a remarkably illustrious woman whose knowledge of Tanach, meforshim and the Mussar thoughts of the ginats of the previous generation was uncanny. She raised a remarkable family of Bnei Torah, maggidei shiur and Roshei Yeshiva as well. The Levaya was held in Yeshiva Zichron Aryeh of Bayswater, started by her husband, Rav Shaya Cohen Shlita. What follows is a glimpse of what was said at the levaya.

Rav Aryeh Ze’ev Ginsberg began and applied what Rav Hutner zt”l wrote on his wife’s matzeivah – sheli veshalechem mishela – the Torah is from her.

Her brother Reb Shlomo Pletchinsky Shlita, (pictured above) a Rosh yeshiva in Yerushalayim, was of the first Maspidim:

In the teary Hebrew sing-song that characterizes Yerushalmi levayas, he said:

She was the pe’er of the family. She personified ahavas haTorah. When father was by the Chazon Ish and the Brisker Rav she absorbed it all. With all the ruchnios of the dooros of that situation. Father was so proud of her. She was his right-hand assistant, she ran all his errands..She had Ahavas Hatorah, Mesirus nefesh l’torah.. Persoanlly she did for me, her brother, remarkable hachnasas orchim.. she begged us not to leave. How can someone make someone feel so welcome – as if its their house? She was dedicated to her husband’s avodas HaKodesh

Rav Yechiel Perr Shlita per focused on her lechtech acharai bamidbar – How she went with him to the midbar in California, and then to start all over again in New York.

One son-in-law, Rabbi Avi Pollack, the Rosh Yeshiva of Am HaTorah, said: What a tznuah she was, a brilliant woman. There was a power of Torah in the house.. A love of learning. My wife would call to help prepare a lesson. She knew all tanach with meforshim. Mdaughters would call for help in assignments and papers. She was always giving.. at 45 or 50 she became a school psychologist.

Rabbi Yehudah Cohen, the eldest son said: You loved us unconditionslly. You personified amor me’at v’assei harbeh. All you wanted was for us to learn Torah. Your great-grandfather was the alter, your uncle Rav Elyashiv zatzal, your father Rav lazer Pletchinsky. She would tell us how she grew up in the house with no running water. Once she related how there was a sign by the butcher that he is not taking credit. She turned around crying. ln 1975, they went to Los Angeles. A group of Beis Medrash bochrim offered to stay to help the Yeshiva, but only if her husband would stay all day in the Beis Midrash to give shiur. When she heard she was elated, “It’s a mishna hamekabel alav ol torah.. that day, my father was put in contact with someone who left the yeshiva a million dollars.

Another son, Chezky said: I had an aneurism. She was there the whole time. She sat by my side. My sister told me that she heard her say at teh time that I should get better and it should happen to her. There were many more maspidim as well, and not a dry eye in the Yeshiva.

Another son explained how one just cannot say stories, because these were maasim bechol yom. She loved Torah, the only thing that mattered to her was Torah learning. She got upset when the Torah was said when she was in the kitchen. She would say, “Now you are talking Torah? You must wait for me to hear it when I come back to the table.”

Rav Shaya Cohen Shlita said: Life is like a Sefer Torah. Every week is a new parsha. We have read these parshios for many years and we still continue to read them. But we cannot just read them, we need to live them. She lived the parshios in the Torah. The transition from this parsha to the next one will certainly be difficult. Her life was one where she earned a remarkable chailek in Gan Eden. Rabbi Cohen had a letter from his wife from over 30 years ago and it said on the envelope “Gita’s ticket to Gan Aden.” he opened it for the first time while he was speaking…. and he read from the letter. It was a mortgage that she had signed for the yeshiva.

Her Kevurah will be in Eretz Yisroel, teh flight leaves this evening from JFK.

the author can be reached at yairhoffman2gmail.com