They say “there is no love like a mother’s love”. That was painfully illustrated when we first met Yehuda’s mother, as she tearfully contacted us, looking for help for her son.

Yehuda K. is a devoted, dedicated husband and father. Learning is his passion and he loves his daily teaching job. One of his favorite activities is going to minyan three times a day, every day. As he continues to lose his eyesight and mobility, he hopes his medical condition won’t take these away from him.

Just 26 years old, Yehuda and his wife Feigie live with their three children in their Teveria home.

About two years ago, he started to have vision problems, which no one (including his doctors) attributed to anything unusual. A short time later though, concern grew hastily after he suddenly lost control of his arms and his little girl fell out of them.

Upon completion of extensive medical testing, it was determined that Yehuda had Multiple Sclerosis, and his condition quickly deteriorated. His walking has become increasingly unsteady and painful, with periodic numbness in his feet. He can no longer carry his young children. He tires very easily, and has continued issues with his eyesight including blurred vision and the inability to see colors. A bout of pneumonia, plus several other health issues resulting from his condition have come up, but with Feigie’s and his mother’s help he tries to deal with them all, while keeping up with his learning and teaching on days he is physically able to do so. 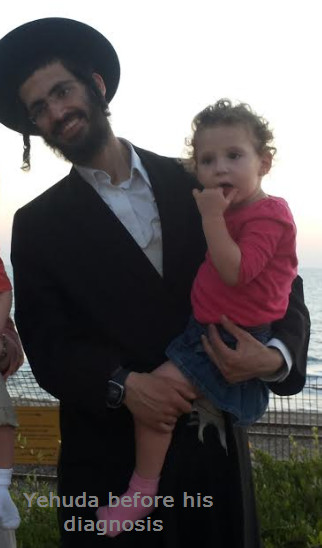 Yehuda has required hospitalization several times for medical care, treatments and testing (some of which he has been forced to pay for, out of pocket). At the onset of the diagnosis his doctors recommended specific drugs to slow the progression of the disease, which had to be administered at the hospital, via infusion. Unfortunately, when he started these vital medications they were not covered by insurance and the costs were astronomical, especially for a family trying to live on a modest teacher’s salary. They were crucial though, so Yehuda’s mother, ready to do anything to help her son, took out loans to enable their purchase.

That period was the start of the decline into financial danger that Yehuda’s family began, in conjunction with the frightening health issues they were contending with. His loss of income, costly medications and treatments, expensive glasses that help his vision issues-all have resulted in severe debt for the young family. As Yehuda’s mobility continues to decrease, his third-floor apartment is no longer a viable place for him to live, so he and his family must move to a different home on a ground floor, another added expense.

Known among his peers, students and especially family members as a quiet, gentle family man who always greets each person “b’sever panim yafot” (with a pleasant countenance) Chaim Yehuda Leib ben Batsheva does his best to work through his pain, discomfort and fear of what the future may hold. But his declining ability to walk especially discourages him. He says “I want to be able to continue to go to minyan, if I can’t, what will I do?”

Please-help us help Yehuda and his family. With $10,000 we can make a real difference in their lives. These funds will cover several months of rent in the ground floor apartment, expenses associated with the move, and medical costs that continuously accumulate from his condition. Your help will lift much of the financial burden from the K. family’s shoulders, thereby lifting their spirits, and that of a mother’s, as well.