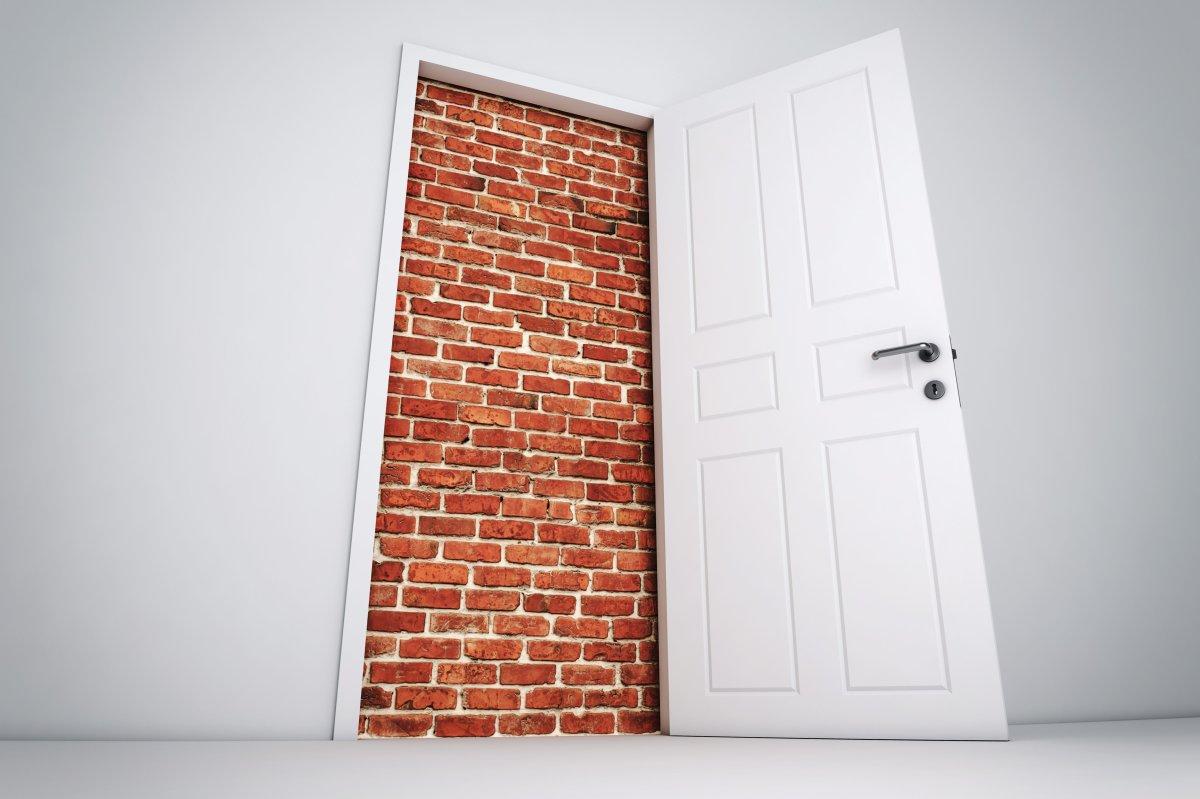 The DPA News agency reported that German Police informed them that a man in western Germany ran into a wall, literally, as he opened his front door to leave the house this past Monday morning.

The man was heading out of his house in Mainhausen, near Frankfurt, but found that unknown perpetrators had built a wall in the doorway during the night.

Police spokesman Ingbert Zacharias explained late Tuesday that officers don’t know whether the wall was on account of a prank, a dare, or an act of revenge.

IF THE OWNER WAS JEWISH

What concerns us, however, is an entirely different issue.

What would be the implications of this bizarre case – if the owner of the house was Jewish?

Our question involves a halachic concept called “taaseh velo min ha’assui.” This concept means, do it (place the Mezuzah) and not from something that was already done.” In other words, a pre-affixed Mezuzah is considered invalid.

So if the homeowner were Jewish, and he were to place the Mezuzah on the doorpost under these circumstances, and then remove the brick wall, that placing of the Mezuzah was invalid. The door did not need a Mezuzah at the time that the wall was there because the door was useless.

It must be removed and then placed back on the doorpost after that brick wall is knocked down.

A MEZUZAH MUST ONLY BE AFFIXED ONTO AN OBLIGATED DOORPOST

IS THE PROBLEM OF PREAFFIXED BIBLICAL OR RABBINIC?

We first see the concept of Taaseh velo min haAssui in regard to Tzitzis. Regarding Tzitsis, the concept is of biblical origin. It is unclear whether this requirement regarding Mezuzah is of biblical origin or of rabbinic origin. Rashi in Menachos 33a seems to indicate that it is of biblical origin since he states, “for it is derived from Tzitzis.” The Mabit states that is of rabbinic origin (Kiryat Sefer, Mezuzah 5).
The Levush indicates that it is a drasha similar to the concept of Taaseh velo min HaAssui “Uchsavtam al mezuzos baisecha” – that the Mezuzah should be placed while the doorpost (Mezuzah) is affixed to the house.
The Talmud Menachos 32b (see Rashi 32a) discusses a case of Taaseh velo min haAssui – where the Mezuzah was affixed onto the doorpost while the doorpost itself was not yet affixed in the doorway. In this case the Mezuzah must be removed and reaffixed. A blessing is recited when the Mezuzah is reaffixed.

The Achronim discuss other scenarios for the disqualification of a pre-affixed Mezuzah. In each of these cases the Mezuzah must be removed and re-affixed, but without a blessing.

B] The Mezuzah was affixed while there was something lacking in the house or room itself.

Thus, if the Mezuzah was attached to the doorpost while the ceiling was not yet constructed, this is considered a pre-affixed Mezuzah.

If when the Mezuzah was first affixed the room was less than four amos by four amos but was subsequently expanded, this is considered a pre-affixed Mezuzah.

C] The Mezuzah was affixed while there was something lacking in the obligation of the resident of the house.
Of these four possible cases, the case stated in the Talmud is clearly a disqualification. The Mezuzah must be removed immediately and replaced again with a blessing.
The other three possible cases are the subject of debate. Since these other cases are subject to debate one should reaffix the Mezuzah in a manner in which it is not pre-affixed. However, one should not recite a blessing when doing so (Shach 286:25). For example, if a Mezuzah was affixed upon an entranceway that did not have a door, and one is now going to install a door, the Mezuzah should be reaffixed after the door has been installed.

BACK TO OUR CASE

But what would happen if the Mainhausen homeowner already had his Mezuzah affixed and then the pranksters put up the brick wall? Would the door which is now no longer usable as a door, now require its Mezuzah to be re-affixed anew after the brick wall was removed?

The answer is that it does not.

If when the Mezuzah was first affixed the room and doorway were of those that necessitated a Mezuzah, and subsequently the room or doorway fell into a state of disrepair and exemption, the Mezuzah is still valid later. The Pischei Teshuvah (286:13) rules that this is not considered a problem of a pre-affixed Mezuzah. The issue is also discussed in the response of Rav Tzvi Pesach Frank (Har Tzvi OC Vol. I #7).
Hopefully, however, such shailos will not arise in our communities.

Mezuzah a Comprehensive Guide by the author is available for purchase on Amazon.com. His other Seforim are also available on Amazon.