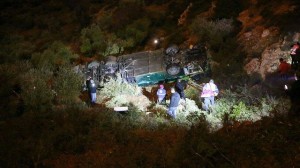 EMS agencies report treating some 15 victims from the bus accident in the Shomron, near Maale Levona in the Gush Shilo area of the Binyamin Regional Council. Three of the victims are reported in critical condition with the remainder less seriously injured. There are reports of fatalities as well.

IDF rescue officials are working with civilian agencies as weather and topographical realities in the area are making the extrication of victims extremely difficult as the bus fell off the road into the wadi. They are beginning efforts to flip the bus over to determine if there might be additional victims.