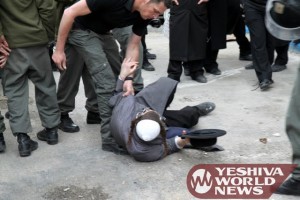 Police are preparing for protests outside Barzilai Hospital as the dispute surrounding the kevarim at the site of the planned fortified emergency room.

It appears that after the government announced its decision to move the bones and build on the original site, Atra Kadisha and its supporters are planning to launch major protests to halt the project before it gets underway. Eyal Gabbai, the director-general of the Prime Minister’s Office has signaled that work it expected to begin in the very near future, perhaps in the coming days.

According to numerous sources, including the Israel Antiquities Authority (IAA), work on location will get underway on Sunday, May 16th). Atra Kadisha is preparing for a major protest, or possibly days of protests. Police in Ashkelon and elsewhere are preparing for expected violence as a result.

Chadrei Chareidim reports that a bus with tens of “zealots” traveled to Ashkelon on Thursday, where they plan to spend shabbos to be on location to begin the protest as soon as the first bulldozer arrives on scene.

The IAA is preparing as well, enlisting the assistance of experts who will personally oversee the relocating of the bones. IAA officials Shuka Dorfman indicates the exhumation of the kevarim will be done expeditiously, indicating he is hopeful the task will be completed in one day.

Atra Kadisha on the other hands is also preparing, determined to prevent bulldozers from disturbing the bones, willing to be beaten and arrested towards accomplishing their mission.

Responding to an IAA request for protection, with officials reading the political map regarding Atra Kadisha, police are calling up hundreds of units to be on hand to prevent protestors from interfering with construction work.