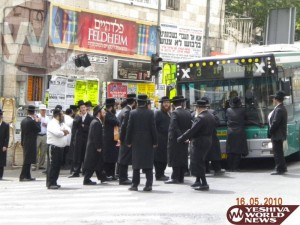 Israel police officials on Sunday morning are breathing a sigh of relief, expecting hundreds if not thousands of Atra Kadisha supporters and protestors as archeologists during the predawn hours on Sunday morning began the work of exhuming kevarim found in Ashkelon, at the site of the proposed Barzilai Hospital new emergency room. In actuality, only several tens of protestors were on hand, all evacuated by authorities in a few moments.

Officials supporting the decision exclaim they base their right to remove the bones on piskei halacha from Israel’s Chief Rabbis, Rabbi Shlomo Moshe Amar Shlita and Rabbi Yonah Metzger Shlita. In addition, officials point out that experts have stated it is all but certain the bones in question are not those of Jews. Israel Antiquities Authority Southern District director Dr. Yigal Yisrael explains that the ruling of the chief rabbis has cleared the way to respectfully exhume and relocate the bones, adding the chief rabbis acted with the approval of HaGaon HaRav Ovadia Yosef Shlita.

Deputy Minister of Education Meir Porush on Sunday morning commented as well, saying “The prime minister made a mistake here. It does not matter if we are dealing with Jewish or non-Jewish bones”.

Porush points out that since the millions of kedoshim were murdered in the Holocaust, and today, “there are Jewish cemeteries throughout Europe, in Prague, Warsaw and other places” and moving the bones in Ashkelon sends them other countries a clear signal, that they may do the same. Porush stressed that in the eyes of the nations of the world, it is not significant if the bones are those of Jews or non-Jews, the fact they are being moves tells them they may do the same if and when they choose to.

Ashkelon’s Rav Blau Shlita spoke with Israel Radio, explaining the protests are not an issue of political strength of pride, but kovod ha’mes and the responsibility of the living to protect those no longer able to defend themselves.

Officials in the Prime Minister’s Office report Prime Minister Binyamin Netanyahu is constantly updated, aware of what is taking place in Ashkelon, monitoring this sensitive matter. Mr. Netanyahu released a statement on Sunday morning that the public’s interests have conquered chareidi protests in this case.

A number of Ashkelon residents explained that “Ashkelon is simply not Yerushalayim”, telling the press that the chareidim who arrived from Jerusalem are trying to enlist support, to incite residents to protest to protect the honor of those interred on the building site, but from their perspective, things are different and simpler, explaining that Barzilai is the only medical facility in the area and if and when the rockets begin flying they need a fortified emergency room hospital facility and that is how they view the equation.

In Yerushalayim on Sunday morning, protests began at Kikar Shabbos during the morning hours, as one can see from the accompanying photos. Police at noon announced at least 26 protestors were arrested in Ashkelon since motzei shabbos.