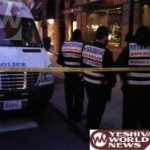 A well-dressed gunman told an upper East Side jeweler he needed cash for his sick child – and then he blasted him in the chest, killing him inside a Madison Ave. store.

The shooter made off with $4 million after executing Henry (Hank) Menahem A”H during a midday heist in January.

The “did-it-for-my-kid” account – relayed to cops by the lone witness to the shooting – shed light on a possible motive, but drew silence from Menahem’s relatives. It also struck the co-owner of the jewelry store as fool’s gold.

“I don’t believe it’s real,” said Sam Kassin, one of the owners of R.S. Durant, where Menahem was murdered. “If you’re looking for help for your child, you would kill somebody else? Please.”

Detectives assigned to the case don’t know what to make of the killer’s words, uttered seconds before the shooting. Police Commissioner Raymond Kelly confirmed the gunman’s statement, but wouldn’t discuss the case.

Menahem’s relatives in New Jersey have not spoken publicly about the slaying of the 71-year-old man, who left behind a wife and three grown children.

“We don’t want to talk about any of this,” one relative told the Daily News last week. “We just want to be left alone.”

The investigation into the midday murder on one of the city’s toniest shopping strips appeared to pick up steam in February when cops arrested Edmond Alma, 46.

Alma has been charged with possession of stolen property. Police said jewelry found in his apartment was from the heist.

A judge ordered him held without bail. Alma, who is due in court Wednesday, hasn’t been charged in the murder, but police tagged him a “person of interest.”

Police said the killer was wearing a blue overcoat, gray slacks, sunglasses, a black wool coat and glasses when he walked into the pricey boutique and announced a robbery on Jan. 27.

“You think I’m kidding?” the gunman barked at Menahem when he was slow to fill two canvas bags with jewels. The shooter popped the clip from his handgun to show he was serious. He slammed it back in.

Then the cold-blooded killer whined that he needed the big score because his kid was sick, and pulled the trigger.