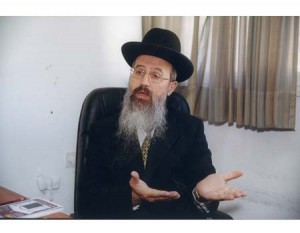 Senior figures in the government or in the judicial system cannot join a prayer quorum, according to Holon’s Chief Rabbi Avraham Yosef, who is also a representative on the Chief Rabbinate Council and son Chcham Ovadia Yosef Shlita.

“It is forbidden to allow them to participate or to integrate them in any synagogue liturgy,” Rabbi Yosef said. “We must ignore their existence, as if they were just air.”

During the program on halachic issues he presents each morning on radio station Kol Chai, Rabbi Yosef addressed the question of who is worthy of serving as a Shliach Tzibur on Rosh Hashanah and Yom Kippur. Whoever sends his children to learn in secular schools, he said, or brings his companions before courts which do not rule in accordance with the Torah, cannot take this role.

He also detailed what the judges in such courts should face: “The judge himself, even if he knows how to pray very well, even if he knows how to do everything excellently – from the moment he was appointed judge he made himself unworthy of joining a quorum,” Rabbi Yosef said. “Even if he promises that all his rulings will be in keeping with the Shulchan Aruch, he has still lifted his hand against the Torah of Moshe Rabbeinu and is not worthy of joining anything holy.”

Later, in response to a question from a visitor to the Moreshet website, Rabbi Yosef clarified that his ruling includes anyone working in the State Prosecutor’s Office or police investigation branch.

“Recently… some religious judges have been appointed with yarmulkes on their heads which makes it seem as if the court is ruling according to our holy Torah,” he said, adding that this was a gross distortion.