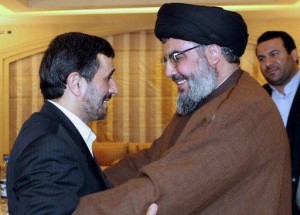 Nasrallah proudly presented to Ahmadinejad an Israeli rifle seized during the 2006 Israel-Hizbullah war.

Hizbullah said in a statement that Ahmadinejad and Nasrallah discussed the Iranian leader’s “historic” visit.

It added that in a gesture of gratitude and loyalty Nasrallah offered Ahmadinejad the personal weapon of an Israeli soldier which had been seized during the 2006 war.

Before the late Thursday meeting with Nasrallah, Ahmadinejad predicted the demise of arch-foe Israel from Bint Jbeil, Hizbullah’s bastion in south Lebanon, only four kilometers (2 miles) from the Jewish state.

“The whole world knows that the Zionists are going to disappear,” he said to thunderous applause before a frenzied crowd in Bint Jbeil.

“The occupying Zionists today have no choice but to accept reality and return to their countries of origin,” he added.

“The best response to the hateful verbal aggression from across the border was given here 62 years ago,” Netanyahu said in Tel Aviv, referring to Israel’s creation in 1948.

In Bint Jbeil, thousands of men, women and children crammed into an outdoor stadium and onto rooftops waving Iranian, Lebanese and Hizbullah flags and cheering the hardliner Ahmadinejad who arrived on a Lebanese army helicopter.

His official visit has been denounced by the United States and Israel as a threat to regional stability.

“Bint Jbeil is alive and well,” Ahmadinejad told the crowd. “I salute you, people of the resistance. You are a solid mountain. We are proud of you and will remain forever by your side.”

Bint Jbeil was flattened during Israel’s devastating summer 2006 war with Hizbullah, considered a proxy of Iran.

His visit to the south brought Ahmadinejad the closest he has ever been to Israel and was seen as a joint show of defiance with Hizbullah.

“We hope to see Nasrallah with him here and to see them both one day on the other side of the border,” she added, declining to give her last name.

Ahmadinejad later went to Qana, which earned a grim place in history after being targeted by Israeli shelling that killed 105 civilians who had sought shelter at a U.N. base in 1996 during the Jewish state’s “Grapes of Wrath” offensive on Lebanon.

The village was again the site of tragedy when a shelter collapsed on dozens of people, including disabled children, during Israeli strikes at the height of the month-long 2006 war.

Ahmadinejad laid a wreath at a memorial for victims of the 1996 strikes and also paid homage to the people of Qana.

“Qana’s martyrs are alive and its enemies are dead,” he told the crowd. “You are victorious and your enemies have tasted defeat.”

Israeli officials have slammed Ahmadinejad’s visit as a sign that Lebanon had “joined the axis of extremist states,” while the United States called it a “provocation.”

The visit has underscored Iran’s reach in Lebanon through Hizbullah, the country’s most powerful military and political force.

“His travel to southern Lebanon… is solely to rally Hizbullah, which continues to serve as… Iran’s proxy in Lebanon,” U.S. State Department spokesman Philip Crowley told reporters in Washington.

“So his presence there we think is a provocation that continues to undermine the sovereignty of Lebanon and the security of the region,” Crowley said.

The visit has also drawn criticism from Lebanon’s pro-Western parliamentary majority, who see it as an attempt to turn the country into “an Iranian base on the Mediterranean.”

The trip comes at a sensitive time, with Prime Minister Saad Hariri in a standoff with Hizbullah over a U.N.-backed probe into the assassination of his father, former premier Rafik Hariri.

The tribunal is rumored to be set to indict Hizbullah members over the 2005 assassination, and tensions have grown steadily, raising fears of renewed sectarian violence and the collapse of the hard-won national unity government.

Although Ahmadinejad has trod carefully since his arrival, he nonetheless rose to the defense of Hizbullah at a rally on Wednesday, saying the U.N. court was framing the Shiite party.

Disdain for Hariri’s camp among Hizbullah supporters was apparent during Ahmadinejad’s visit, when every mention of Hariri’s name was met with jeers.

“We are seeking to spread science and they want to keep us in the dark,” he told students and staff.

From south Lebanon, Ahmadinejad returned to Baabda Palace to bid farewell to President Michel Suleiman before his departure around midnight.