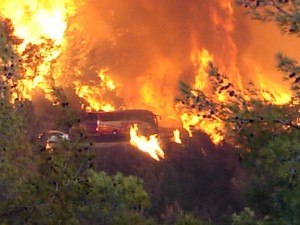 New images (link posted below) uncovered by Haaretz and taken by a amateur photographer reveal the final moments of what may be the most dramatic moments of the wildfire that has been ravaging the Carmel since Thursday.

On Thursday, a bus filled with Prison Service cadets burned completely, killing 36 of its passengers, after a fallen tree blocked the road it was travelling on, trapping it in flames

The Photos released on Sunday, taken by tour guide and Carmel expert Dan Oren, depict the trapped bus in what seems like minutes before taking alight. “On Thursday afternoon we saw a massive fire going down the mountain toward us, with smoke rising to the sky,” Oren told Haaretz.

“The fire began rolling down. The fire trucks tried to form a blocking line, but the flames leaped over the road. At that point we were still looking and taking pictures,” Oren added, saying that suddenly “we noticed that there was a bus in the fire – about 400 meters as the crow flies from where we were.”

“I hardly managed to aim the camera and take a few pictures, and then a wall of fire just covered the entire area. We longer saw the bus. It was almost as if it vanished, and we saw only fire. Flames as high as 30 or 40 meters,” Oren added.