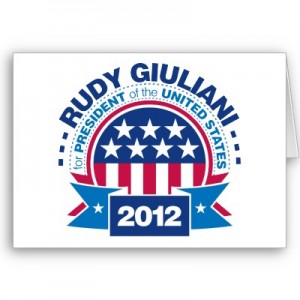 Confident that he’d have a chance to win, Rudy Giuliani is rounding up his top political advisers for a possible 2012 presidential run, sources tell Page Six.

Sources say the tough-talking former mayor “thinks the Republican race will be populated with far-right candidates like Mitt Romney, Sarah Palin and Mike Huckabee, and there’s opportunity for a moderate candidate with a background in national security.”

Giuliani has even scheduled a trip to New Hampshire for next month to meet with constituents in the state that failed him in January 2008, when he placed fourth in the Republican presidential primary.

The problem is that even Rudy loyalists think it’s a bad idea. “They think this is crazy,” a source said. “They realize how long the odds are, but they are standing by.”

Some insiders say it’s a way for Giuliani to stay relevant. “He’s not doing all these morning talk shows because he enjoys the conversation, it is because he wants to stay in the game,” one said.

“He has previously said he would not run again, but he wants us to think he will,” a different source said. “He’s not being talked about among the Republican contenders, and his ego can’t take that.”

Others say that Giuliani is positioning himself as a Republican nominee hopeful to leverage a cabinet position, or even a nomination for vice president because his previously lucrative business has slowed.

“Nobody is paying $100,000 to hear the same warmed-over 9/11 speech. His speaking fees have dropped as well as his consulting fees,” a source told us.

But former Giuliani chief of staff Tony Carbonetti told us, “His business is doing well. He’s doing a number of speaking engagements in Scotland, Colombia and France in the past six weeks. The Washington Speakers Bureau fee hasn’t gone down.

“[Rudy’s law firm] Bracewell & Giuliani is one of the top 100 firms in the country. As for his political future, he’ll make the decision as to if he thinks he will play an effective role in the political process.” A rep for Giuliani didn’t get back to us.