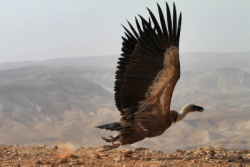 An Israeli bird expert has called on Saudi Arabia to release a vulture that has been captured amid speculation it was on a spying mission for Israel.

The Saudi press speculated the rare griffon vulture, which was carrying a GPS transmitter, was sent by Israeli spy agency Mossad.

The avian ecologist says the vulture did not come from Israel but had been trapped there and fitted with a transmitter as part of a research project to track bird migrations.

The vulture was found in the Saudi desert carrying a tag bearing the words, Tel Aviv University.

Last month the governor of Egypt’s South Sinai region said he was not ruling out speculation that Mossad may have been responsible for releasing a killer shark in the Red Sea off the resort of Sharm El-Sheikh.

The theory emerged after a tourist was killed and others were injured in a spate of shark attacks near the Egyptian resort.